The night before the party it rained, which I think had people a little nervous for the following day, but we woke up to clear skies – and a breeze!  Germany is seeing a heatwave and it was slightly broken that morning.  However, this did not last long.  By the time mom and I were ready to head to the party and had walked over to the brewery to meet Evelyn and Gunter, it was already getting close to scorching – and to make matters worse, the humidity had begun to come back.

You may think that this would mean that the day (and the party) were sure to be ruined, as the party was taking place outside on the grounds of the villa on the brewery however, for everyone who was invited, it didn’t matter.  The party turned out to be a fantastic success, beginning at eleven a.m. and not ending until well into the night (I am not sure just how late, but mom and I were back in the hotel at 9:30 p.m.).

The party started with brunch – scrambled eggs and sausages and a large Italian buffet.  Mom and I helped Evelyn’s mother and aunts set up the cakes that they had made for the occasion on the dessert table – and eagerly looked forward to when it was time to eat the cakes.  There was quite the array, including Tollhouse cookies, which one of the aunts made because Gunter enjoys them.

There was a pianist playing in the morning, and waiters passing around bottles of Prosecco, so it was very pleasant to sip sparkling wine and listen to “Maria,” “The Man I Love,” “What Are You Doing the Rest of Your Life?” and more songs coming from the piano.

Soon, however, it was time for mom to sing.  She performed outside on the deck, so that most of the guests would be able to see her.  After her three solo numbers, she brought Evelyn up to do a duet. 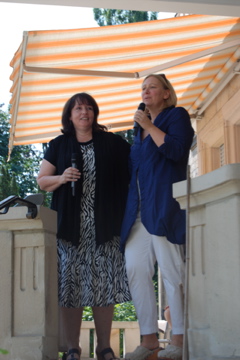 Mom was praised by all the guests (I think a few even asked her to return next summer for some other parties), and we spent much of the rest of the day just enjoying the company.  There were only a few people that we knew, but a lot of people spoke English and we were able to converse with no problem (but it did make me feel guilty that I don’t speak a lick of German and can’t really figure any of it out!).  Some of the people we were familiar with were Evelyn’s sister and her daughters, who we met the last time we visited.

We also made friends with a cousin of Evelyn’s, a little girl named Kim with the biggest brown eyes.  She liked putting ice on herself, and on everyone else (but not in the annoying, down-the-back-of-your-shirt way, but by running it up and down people’s arms to cool them off).  She was the youngest at the party, and was very amusing!

Later on in the day, Evelyn and Gunter’s friends put together a special presentation for them, and then mom sang again.  Evelyn sang a few songs in honor of Gunter as well, and then everyone just hung out, drank wine, continued to eat (for there was also a barbecue later on in the day) and enjoyed each other’s company.

By the time we left the party, we were tired out and ready for bed, but it had been a great day!