The title of this post pretty much sums up the whole of day eight, which was one of our lower-key days on the trip. Yesterday began with a brief trip to the Grand Boulevards in Paris, where my sister and I stayed when we came to Paris for the first time seven years ago. It was in the Opera district, and the hotel was located in an alleyway of sorts that connected the street from the opposite side of it. They alleyway, and the matching one across the street, is normally full of bustling shops and restaurants, but as yesterday was Bastille Day, most of the shops were closed. However, there was one very nice home shop open – full of table linens and silverware and containers for sugar, flour and coffee. Naturally I wanted everything in this store, and now want to redo my kitchen.

As it was pouring in the morning, there wasn’t much else for us to do and so we headed to the train station a little bit early to catch our train back to Germany. Once on the train, the ride was smooth and I spent most of it listening to music, reading my book from Heathrow Airport (The Lost Art of Keeping Secrets, by Eva Rice – isn’t that title just divine?), and watching the countrysides of France and Germany rush past the train window.  Train travel definitely has its merits!

Evelyn picked us up at the train station in Mannheim and we drove back to Karlsruhe and checked back into the hotel.  Our luggage was safe and sound (we had left it behind and took small bags to Paris) and we spent a few hours freshening up before we had to head back to the villa so that mom could perform at a fundraiser. 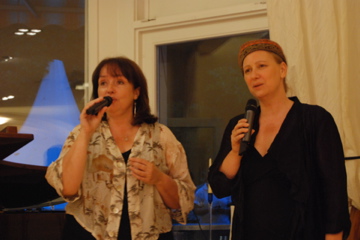 Much of the evening was spent at the fundraiser, with mom and Evelyn performing both individually and together, and we headed back to the hotel, tired but happy that it had rained and there was a slight break in the heat for the night!