The alarm went off at 6:45 a.m. on day two of our Florida Adventure. Somehow, this was still not the problem it is when the alarm goes off and I have to go to work. I willingly got up and jumped in the shower, ready to take on Universal Studios and The Wizarding World of Harry Potter. Armed with coffee and a quick breakfast of protein bars, we headed to the front of the hotel to wait for the shuttle. And we waited… and we waited… and we waited… The excitement of the morning quickly turned to slight annoyance, as we were both really eager to get to Harry Potter World and see all the exciting aspects of the books and movies come to life. By the time the shuttle finally arrived, we practically jumped on board, and we were on our way!

First tip for visiting the Wizarding World of Harry Potter: buy a park-to-park ticket. Now, I am not saying this because we made this mistake – I, in fact, knew in advance that you needed a multiple park ticket in order to visit both parts of Harry Potter World, but I happened to come across a number of angry tourists who were not aware of this fact before they got to the parts.

Second tip: go in the order of the books. This means, visit Diagon Alley first before you get to the Hogwarts section. Ultimately, this doesn’t really matter, but if you’re going to authenticity and the real book experience, this is what you want to do. And this is, in fact, what we did. When we arrived, we headed for the Universal Studios section, and made our way as quickly as possible to the very far end of the park, where the section is located. Here’s where I have to really commend Universal, because they made it so that you cannot see any part of Diagon Alley until you walk through the brick wall partition. The first place you end up in is the London waterfront, and then you go behind the brick wall and the wizarding world appears.

However, before you get there, make sure you visit the Knight Bus, which is located just in front of the brick wall (you really can’t miss it!). The conductor will be in front, having conversations with the shrunken head from the movie.

From there, you can enter Diagon Alley. If you are as big a Harry Potter fan as me and Sarah are, you will instantly be transformed into the magical world of Diagon Alley. Directly in front of you, at the end of the row of shops, is Gringott’s Bank, complete with a large dragon at the top of it (who will shoot fire at random intervals throughout the day). Sarah and I made a beeline for Gringotts so that we could go on the ride before the crowds got there (that would be my third tip, especially since you need to lock your things up in a free locker beforehand). As you enter the ride and wait on line, you are taken through the halls of Gringotts, into the lobby and finally down into the vaults. After a short video featuring Bill Weasley, you get on the ride. At first, you are supposed to be taking a leisurely trip down to the vaults, but of course everything starts to fall apart and it becomes the “Escape from Gringotts.” Much of the ride is all done by screen, but the car does spin and move around quite a bit (however, we both felt that the warning on the sign for the ride was a little intense, and made it sound much scarier than it actually was). The ride was great, but the whole charm of these things is to immerse yourself in Harry’s World, and Universal did a great job creating that experience.

We spent most of our morning just exploring the different shops and features around the Diagon Alley section. They had everything: Madam Malkin’s, Weasley’s Wizard Wheezes, Florean Fortescue’s Ice Cream Parlor, Ollivander’s… seriously, the attention to detail is fabulous. So fabulous, in fact, that I’ll let the pictures speak for themselves rather than try to describe everything myself. 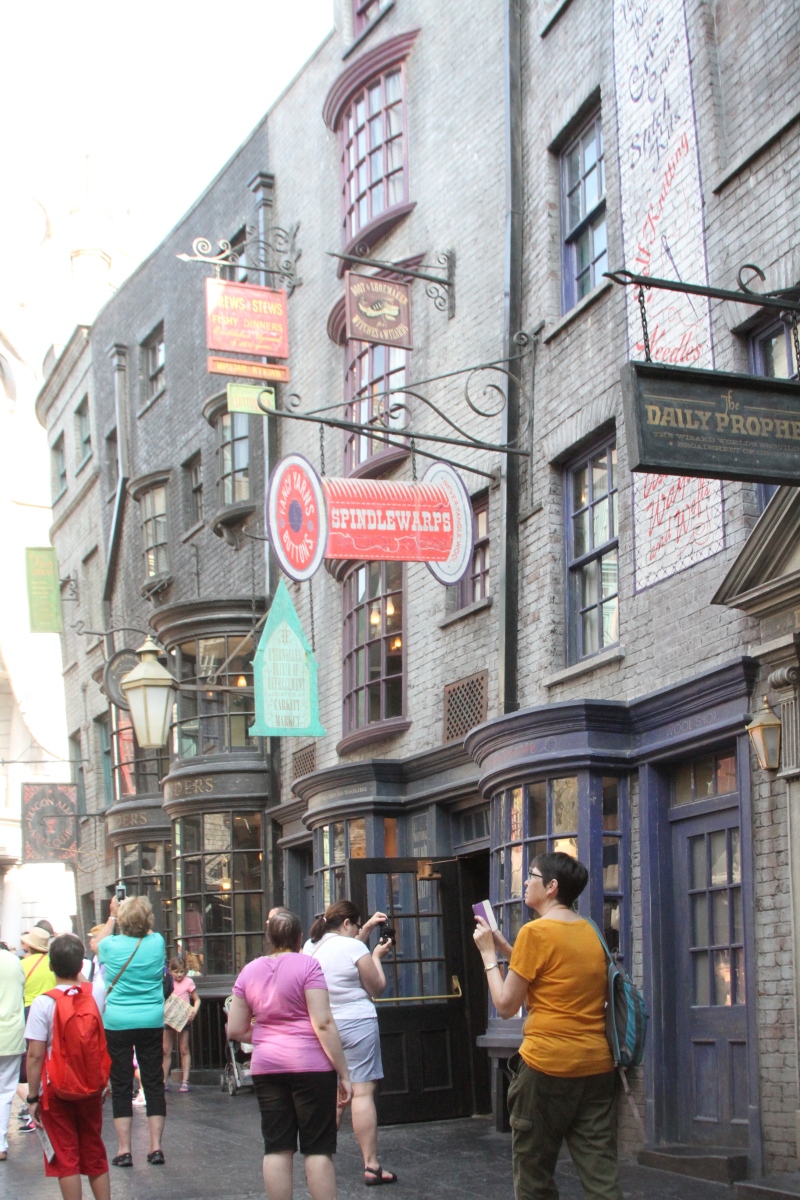 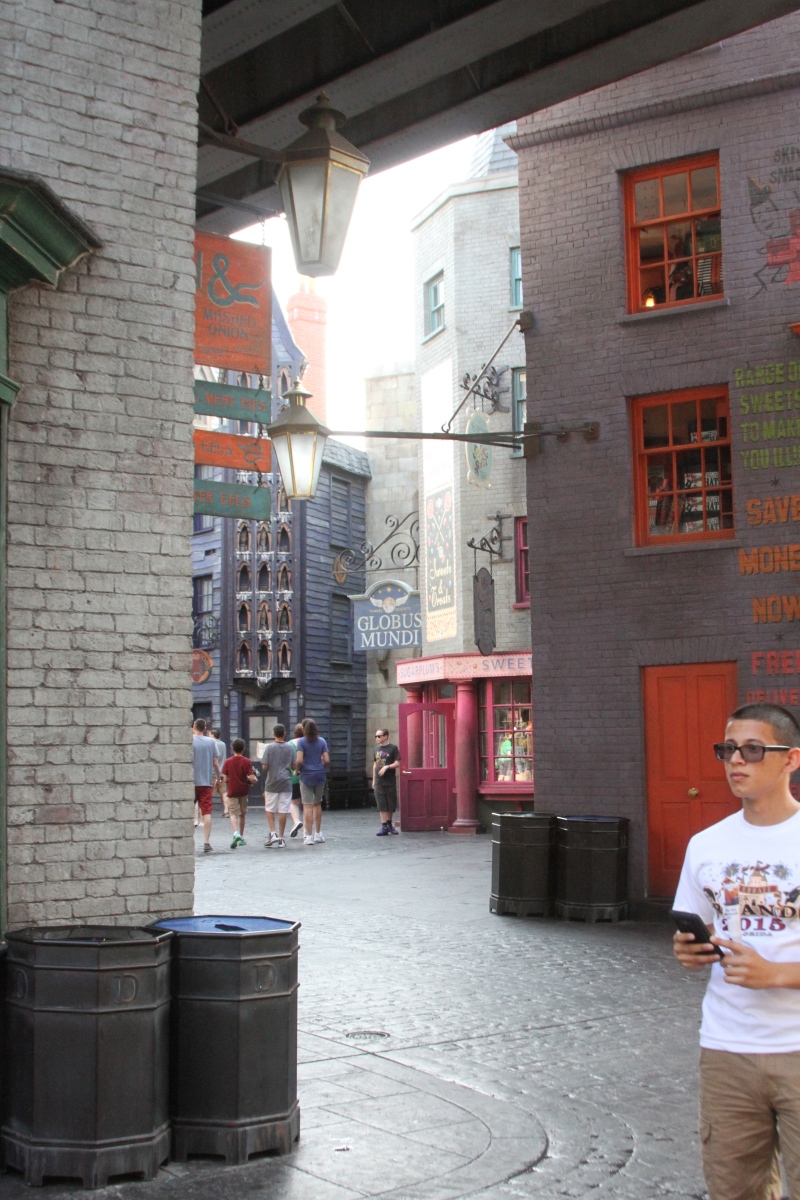 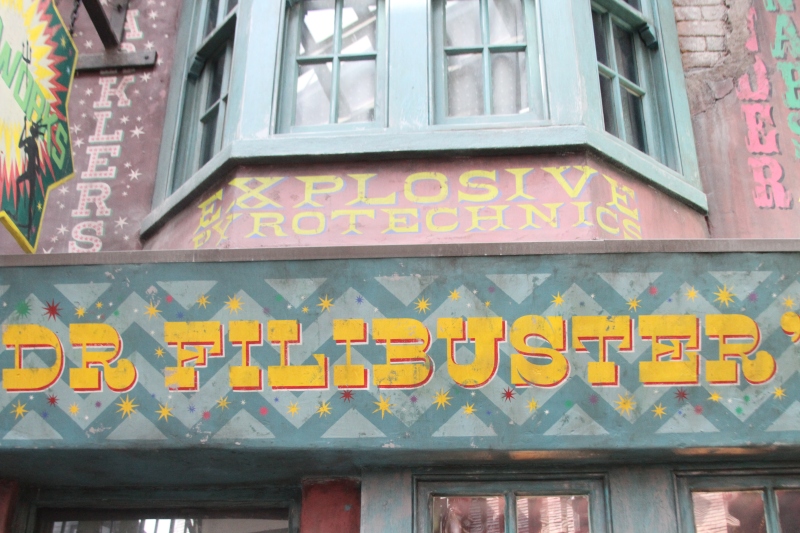 As I had no ice cream the previous day at the Magic Kingdom, I decided I was definitely going to have some at Florean Fortescue’s Ice Cream Parlor. Readers of the Harry Potter books will be familiar with this ice cream parlor. I ended up getting a butterbeer ice cream, even though I was fully intending to have the drink version later in the day. I have to say, this was my only disappointment with Harry Potter World. Butterbeer ice cream just kind of tastes like vanilla soft serve with a little flavoring, and it had me wishing I had tried the earl gray and lavender ice cream or the chocolate chili. But oh well, you live and you learn. If I’m ever there again, I’ll remember this next time!

One of the most awesome things about the Wizarding World of Harry Potter is that it now includes the Hogwarts Express to Hogwarts. Here’s where that park-to-park ticket comes in handy because you can’t get on this ride unless you’ve purchased admission to both parks. For, you see, the Hogsmeade section is in the Islands of Adventure park. As I said earlier, we knew this in advance and were fully prepared so we didn’t have a problem, but this is a good tip for people traveling there in the future to remember. As for the ride itself, you board the train at King’s Cross Station, just as you would do in London, and you slowly but steadily make your way to Platform 9 3/4. The wait is fairly quick as the train holds a lot of people and runs very frequently (another tip: take it both ways – it’s different coming and going). As was the case with the Gringotts ride, part of the experience is the excitement of getting to see the train and the luggage and everything while you’re waiting on line. 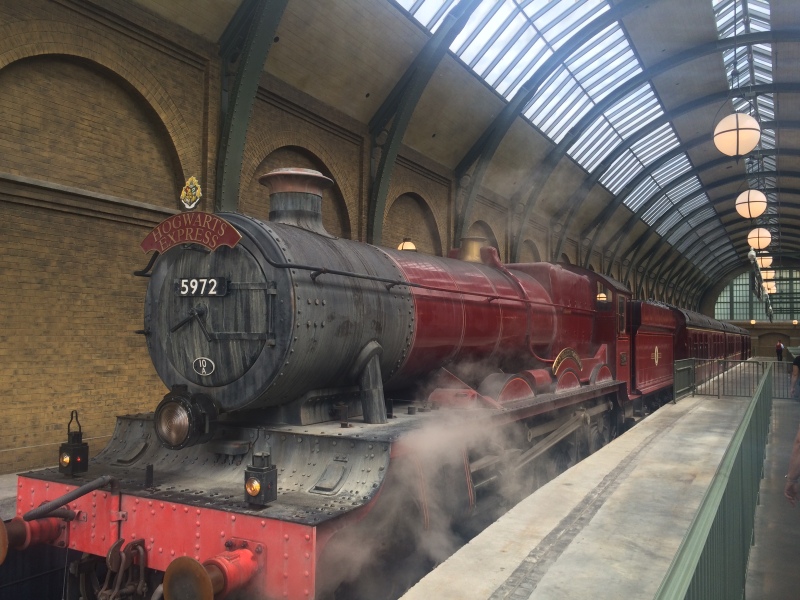 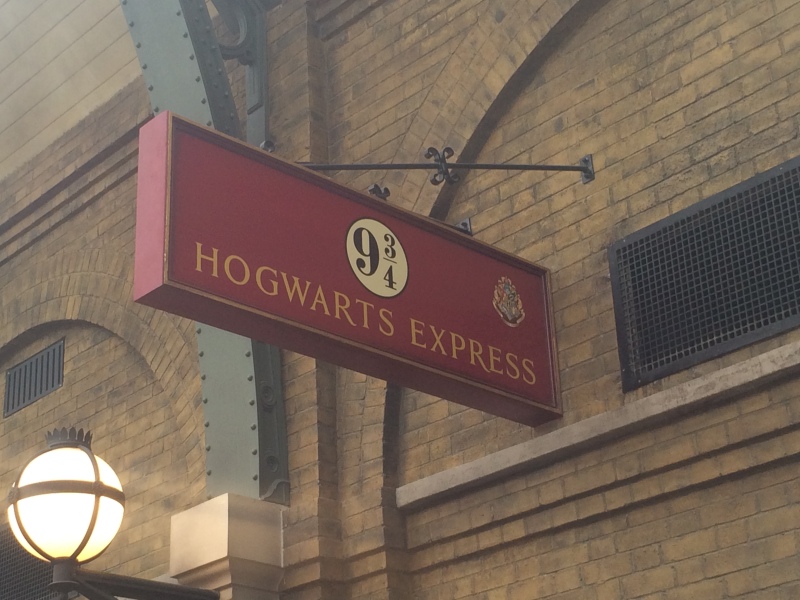 Getting off the train and entering Hogsmeade is just as exciting as entering Diagon Alley. The last time I visited the Wizarding World, only the Hogsmeade section existed and you approached it from a different section of the park. In this case, you leave the train and are right in the Hogsmeade area, which just adds to the magic and charm of the whole experience. As exciting as it was for me, it was much more exciting for Sarah, who had never been to the Wizarding World at all, so it was fun to watch someone else’s reaction to seeing Hogwarts for the first time. 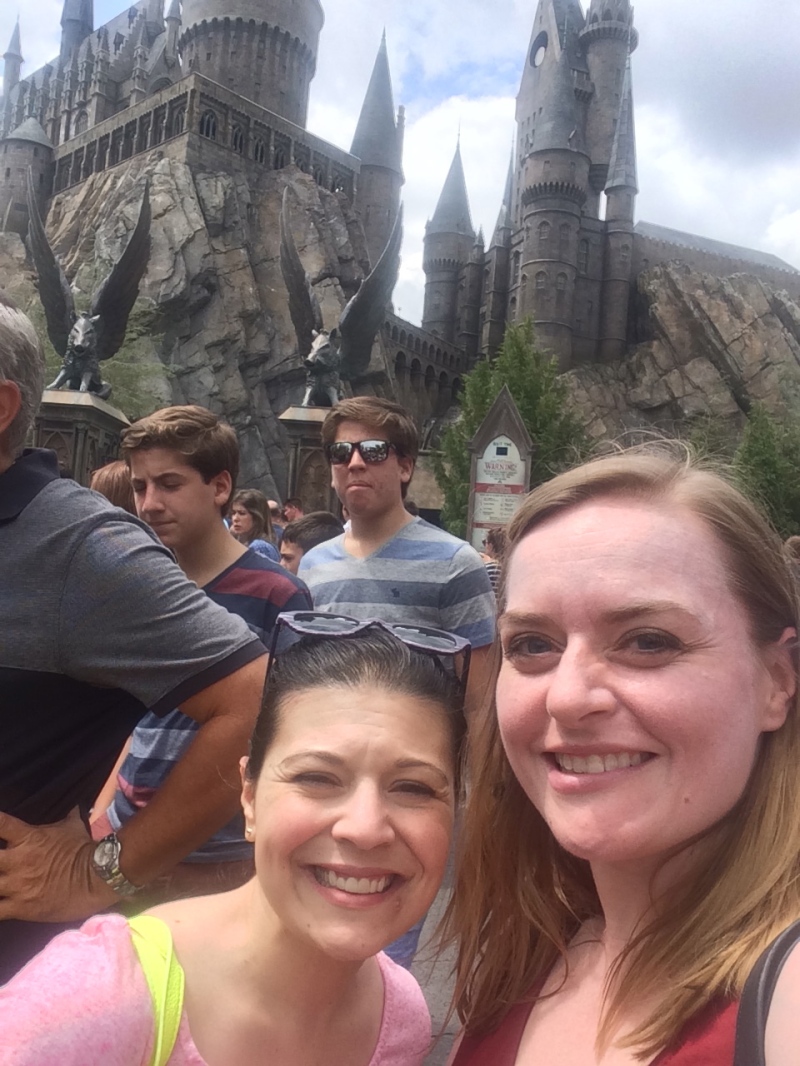 As with Gringotts, I suggested we make a beeline for the castle and go on the ride before it got any more crowded than it already was. At this point, it was the early afternoon and the Hogsmeade section is smaller than the Diagon Alley section and was already very crowded. So we headed to the line and waited. As with everything else, it’s all in the details. While you wait to go on the Forbidden Journey ride, you walk through Hogwarts, seeing Dumbledore’s office, the Gryffindor Common Room, and the Defense Against the Dark Arts classroom as well as many other features of Hogwarts (talking portraits, for example). As I had taken a bunch of pictures when I was there years ago, I didn’t take the camera out while we were on the line, so I don’t have inner Hogwarts pictures to share – trust me, it’s awesome, as is the ride. If you get motion sick easily, I do NOT recommend going on the Hogwarts ride, but if you’re into the simulated motion, then you’ll love this ride. You fly with Harry and Ron through the grounds, running into dragons, dementors, spiders, etc. The while thing is very exciting.

Since neither Sarah or I were particularly interested in the other two rides in Hogmeade (Dueling Dragons and Flight of the Hippogriff), we spent much of our time wandering around Hogsmeade doing some shopping. We visited Honeydukes and bought chocolate frogs and of course stopped off for some butterbeer, which is one of the sweetest substances one can ever consume (I’m pretty sure I didn’t finish it which means I’ve come a long way since I was there last and was able to drink multiple butterbeers!). 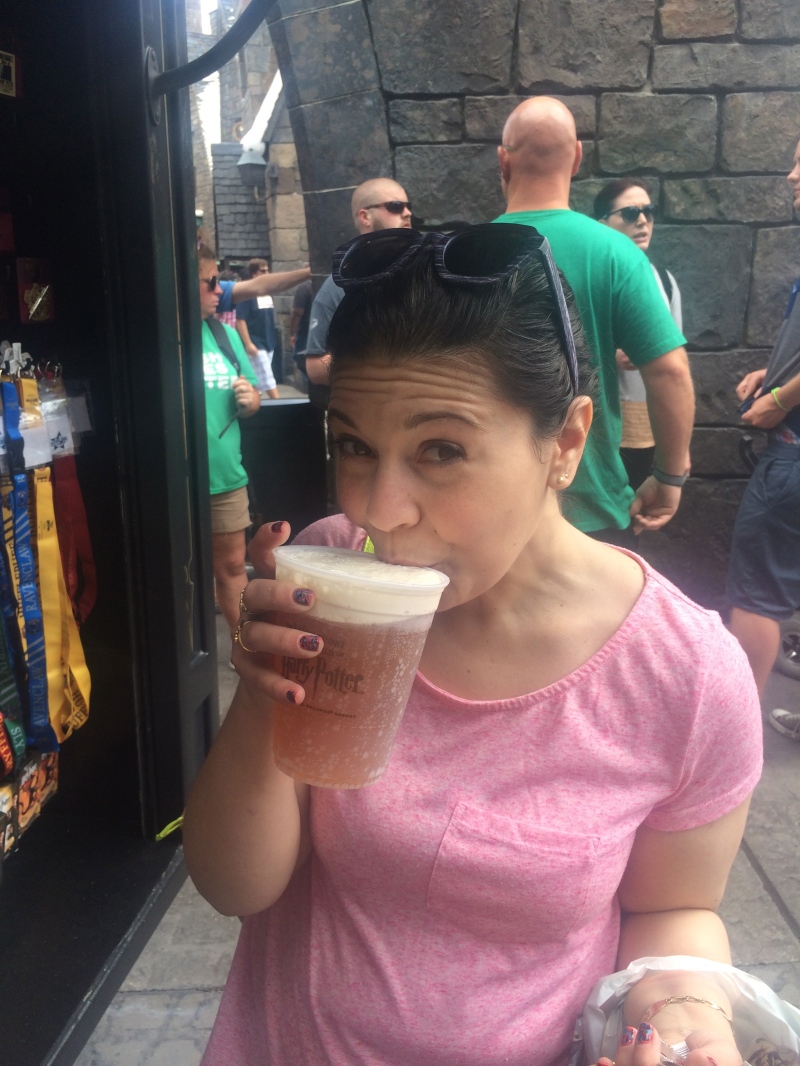 Though we had been positive that we were going to spend the entire day in the Harry Potter sections of the park, we found ourselves growing weary of the crowds and decided to walk around the Islands of Adventure and find some lunch that didn’t consist of candy or sugar. We ended up eating not-so-good salads a cafe, and then shopping around again before circling to the Jurassic Park area, where I took some pictures with the T-Rex.

I have to say, though I like Hogsmeade and Jurassic Park, and the Seuss area is cute, the Islands of Adventure aren’t really my thing. The rides are all too intense for me, so there’s not all that much to do besides walk and shop. After we had made one loop around, we decided to head back to the Diagon Alley area, and check out the other half of the train ride.

Back in Diagon Alley, we headed to Shutterbean’s Photo Studio where we had our moving pictures taken (we’ve got a DVD – it’s one of the most ridiculous things to ever be put on tape!), and shopped some more before deciding we’d seen everything we wanted to see. Thus, we headed out of Diagon Alley, and wandered through the other park. Our first stop was the Springfield area (from The Simpsons), where I took some random pictures with statues (I like pictures with statues and in hats, apparently). We skipped the ride in this area as I remember feeling crazy nauseous after going on it last time. 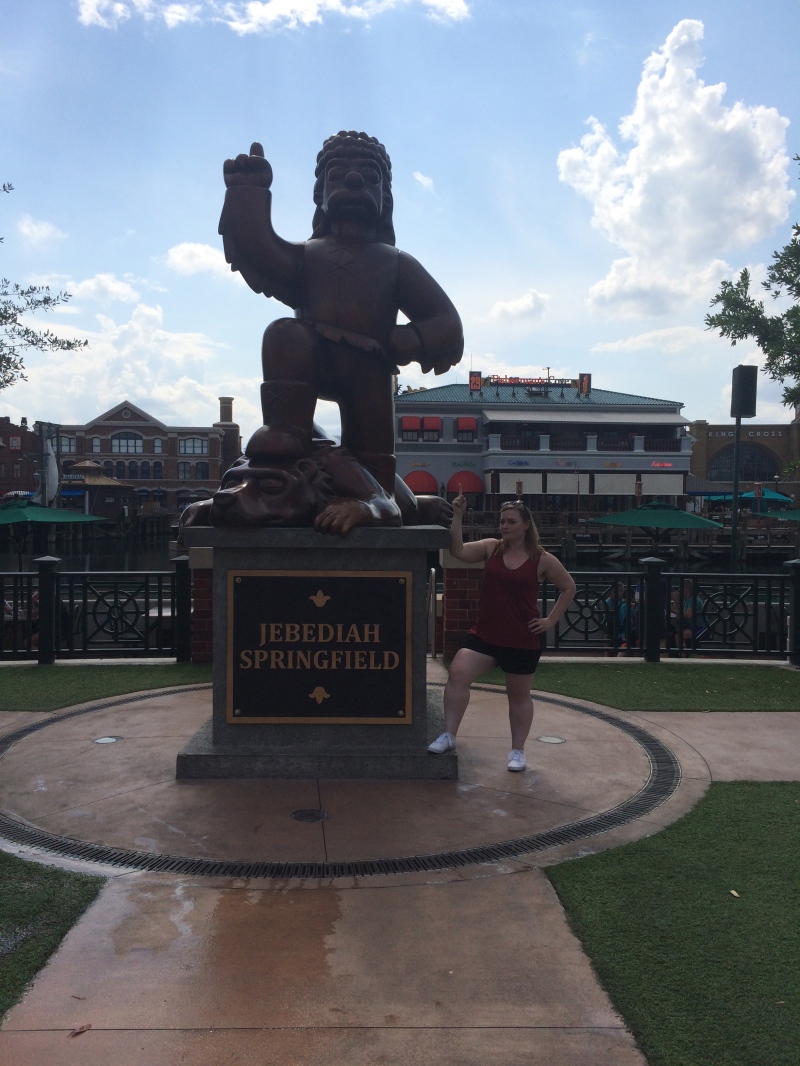 The rest of our day was spent walking through the park a little bit. We went on the ET Ride and the Minions ride, and then decided to call it a day. Our plan had been to get back to the hotel and spend some time at the pool, but the shuttle had other ideas. It was thirty minutes late, and then made a bajillion stops on the way back – very frustrating! However, we were happy to get back and grab a quick dinner – our third and final day was also going to start bright and early at Epcot!