It’s been a long time since I did a theater review.  Even though I’ve been “in theater” for the last ten years as the costume designer for my school, I’ve never actually studied the theory, which I suppose has made me feel unqualified to make a critique.  However, I am a person who forms opinions rather easily, even if they are relatively simple at times.  In the case of Amelie on Broadway, however, it’s a little more complicated.

Frankly, I’m a little stumped as to what I actually think.

If you know anything about me at all, you know that my favorite movie of all time is Amelie.  I saw it the year it came out (2001 if memory serves), albeit not in theater, but on DVD.  Of course, being the Francophile that I am, I fell in love with it instantly.  Audrey Tatou plays the title character brilliantly, and of course the backdrop of Paris never hurts anyone, does it?  Amelie is my kindred spirit – we were approximately the same age when I saw the movie (I was twenty, the character was twenty-three) –  and even though I didn’t really notice at the time, Amelie and I shared so many likes, dislikes and fears.

When I found out that Amelie was going to be adapted into a musical for Broadway, I was a intrigued and frightened.  It was always a given that I would have to see it, no matter what happened and no matter what I heard about it.  I waited and waited, saw videos and pictures from its run in Los Angeles.  And then finally, it came to Broadway.  Previews started the weekend of my birthday.  At the Walter Kerr theater (my initials are KERR).

The signs were obvious – Amelie was clearly coming just for me.

That being said, it took a while for me to actually get to the theater.  The above picture was actually taken in February, the night I saw Waitress (which is a review still forthcoming, as I haven’t had time to write the raving review yet).  It wasn’t until last night that I actually got to head to the Kerr Theater and see the show.

And like I said before, I still don’t really know how I feel about it.

Going in, I knew it wasn’t going to be just like the movie.  It’s like reading a great book and going to see the movie version: you hope it’ll have your favorite parts, but you know it’s going to change some things.  Honestly, it wasn’t the changes that I was so confused by – though they did leave out some essentials that I definitely missed, it was the execution that was confusing more than anything.  My mom, who I met after the show (I saw it with my aunt), asked how it was and I described it as “America ruins everything.” 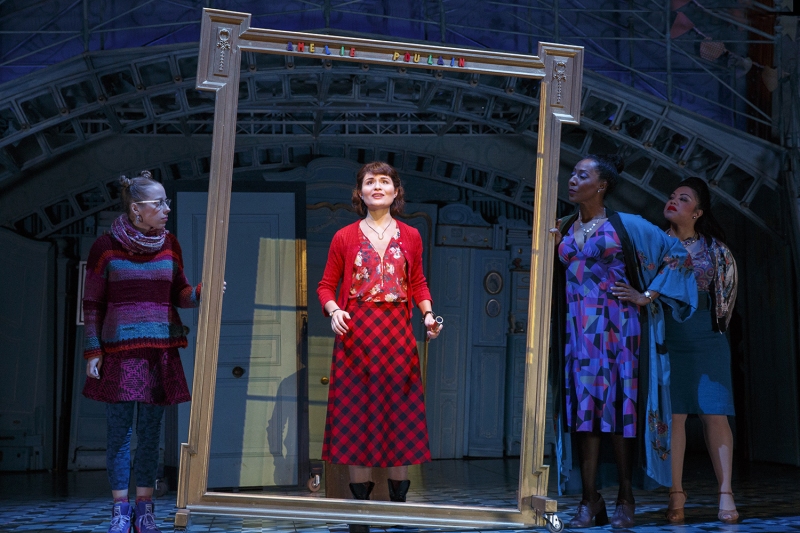 It was cute, and the cast was great.  Phillipa Soo of Hamilton fame (though I will admit I know zilch about Hamilton – yeah, I know, I’m the only person in the world who doesn’t), in particular, was amazing as Amelie.  And the rest of the cast did their best to try and capture the charm and quirk of the original.

My first impression as I was watching was that if you haven’t seen the movie, you’ll be confused as fuck as to what is going on.  Being as well versed in the movie as I am, I knew exactly what was happening and was easily able to follow the storyline, but I feel as though it was almost a summing up of the movie’s best parts.  The Glass Man was not as prominently featured, Lucien was almost non-existent as a character (aside from a really amusing song about figs), and there were some tiny plot points changed.

The show opened with young Amelie discussing her isolated childhood with less-than-loving parents.  Or, at the very least, parents who didn’t really know what to do with her.  So I suppose less-than-affectionate parents is a better way to put it.  Her mother is killed in a tragic, but freak, accident when a tourist intent on ending his life (in the movie it’s a woman) lands on her jumping from Notre Dame.  There’s a brief snippet of young Amelie (played by Savvy Crawford) trying to get along with her distant father when Soo appears and performs my favorite part of the whole thing: the song “Times Are Hard for Dreamers.”

Seriously, listen to it.  It’s my theme song now.

Amelie arrives in Paris and all the movie VIPs are there – the Cafe des 2 Moulins, Gina, etc.  As I stated before, it felt like it was trying to give “a taste of Amelie.”  And as often happens, focus was put on really bizarre things rather than on things I felt would’ve worked better onstage.  For example, they actually dressed up one of the cast members as the fish and went on for far longer than you would think necessary to prove the point that Amelie’s only friend as a child was a fish. 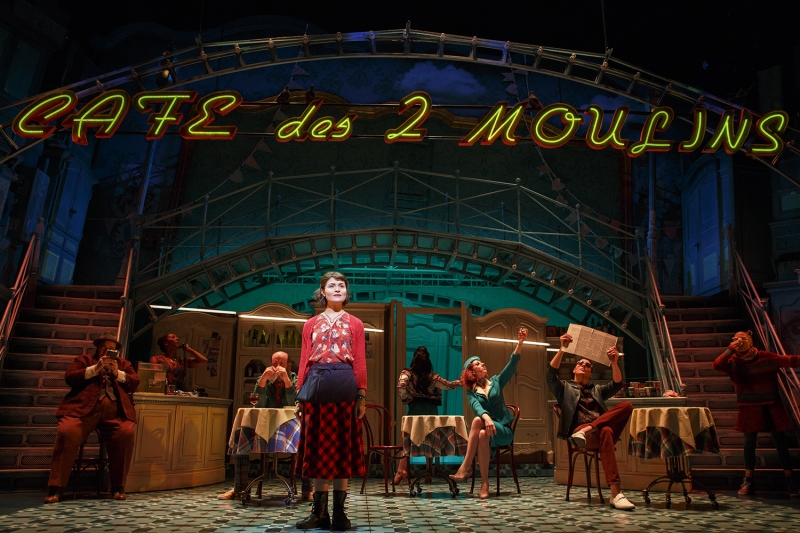 Of course, I was most curious at how the heart of the story – Amelie and Nino – would play out onstage.  The infamous photo booth was there, and they used it too full advantage, along with the special effects to display the photos as part of the set.  However, this is also a difficult thing to convey effectively onstage, especially with Nino’s book of images coming to life being such a prominent part of the movie.

But let’s talk about the costumes for a minute because they were fabulous.   I’ve recently become extremely interested in mixing strange patterns together, and I thought that Amelie’s costumes were a perfect example of this (I want to dress my niece like young Amelie!).  I loved the checked skirt with the floral shirt, two patterns that should normally clash but worked just right for the quirkiness of Amelie.  I definitely think that the costumes emulated the original movie quite well.

Because of time constraints, I’m sure, the relationship between Amelie and Nino is the most developed of all Amelie’s relationships.  In the movie she is friendly to her coworkers; in the show, while she still is, it’s a lesser plotline and so it gets pushed to the side a lot.  Amelie’s therapy patient-like relationship with Dufayel is also there, but it’s not quite as developed in the movie: and Amelie’s struggle with herself, and her ability to risk, is what is at the heart of the original for me. 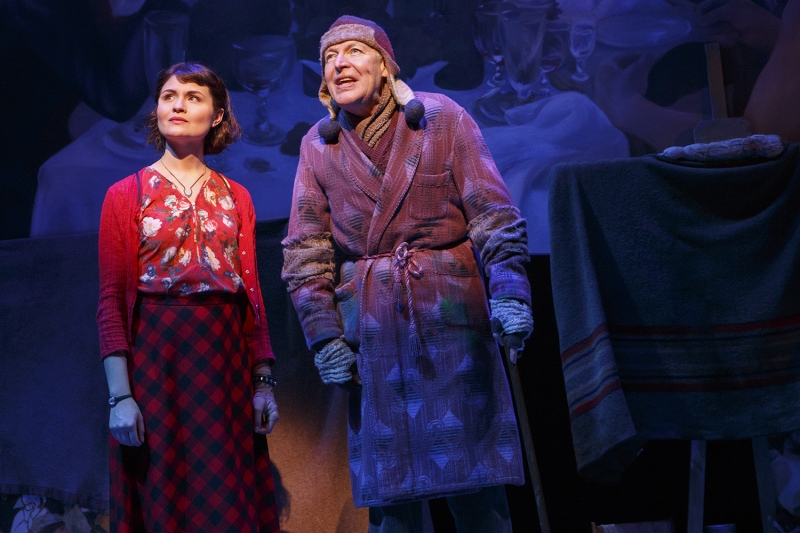 The set captures Paris as well as it could, and used the cast members to move the sets around a lot.  It reminded me very much of Peter and the Starcatcher, and I always think it gives shows somewhat of a playful feel.  Rather than construct a carousel, the cast members bring out carousel horses and walk them around, for example.  And they hit on classic French images, such as this Metro station projection below, as well as the bridge Amelie is standing on:

In the end, my assessment was essentially “I can’t say that I loved it, but I can’t say that I disliked it either.”  I know I spent a lot of time critiquing various things, but I still enjoyed being able to spend time with this characters in a slightly different way.  It’s just hard to top something so beloved.