On the morning of our first full day on Gozo, I woke well rested and ready to begin experiencing everything that Malta had to offer. Sarah’s mom had a full schedule planned for us for the week, and I was excited about every moment of it. Much of what was on the schedule was something we had talked about for weeks beforehand, and it was amazing that it was finally time to see it all. Before going on this trip, Malta was not something that had been on my radar, but I was excited to learn about a new place and get the chance to thoroughly explore it.

The first thing that I did was head to the kitchen so that I could see the view of the water during the day. It was beautiful at night, but even more so during the day. In the panorama of the view you can see the island of Comino to the left, Mgarr below in the center, and more towns to the right. Everything is surrounded by the gorgeous blue water.

After a simple breakfast of scrambled eggs and toast, our first destination was church – to actually attend church. I found it highly ironic that my first official activity in Malta was going to church, something I rarely do at home. However, despite the service being in all Maltese, I have been to church enough that I was able to follow what was going on. We were able to easily walk to and from the church – it was literally right around the corner from the apartment – and we got to see cool doors and streets, and the little main square in the town of Nadur. Every town in Malta is situated around a square with the church. The church in Nadur is the Basilica of St. Peter and St. Paul, and was built in 1760.

We were scheduled back at Sarah’s grandmother’s house at 1:30 for lunch, but church was over around 11:30 so we had two hours to kill.   We walked slowly back from church, looking at the small square and the decorations dotting the street from the village’s ‘festa,’ which had taken place a mere few days before our arrival. 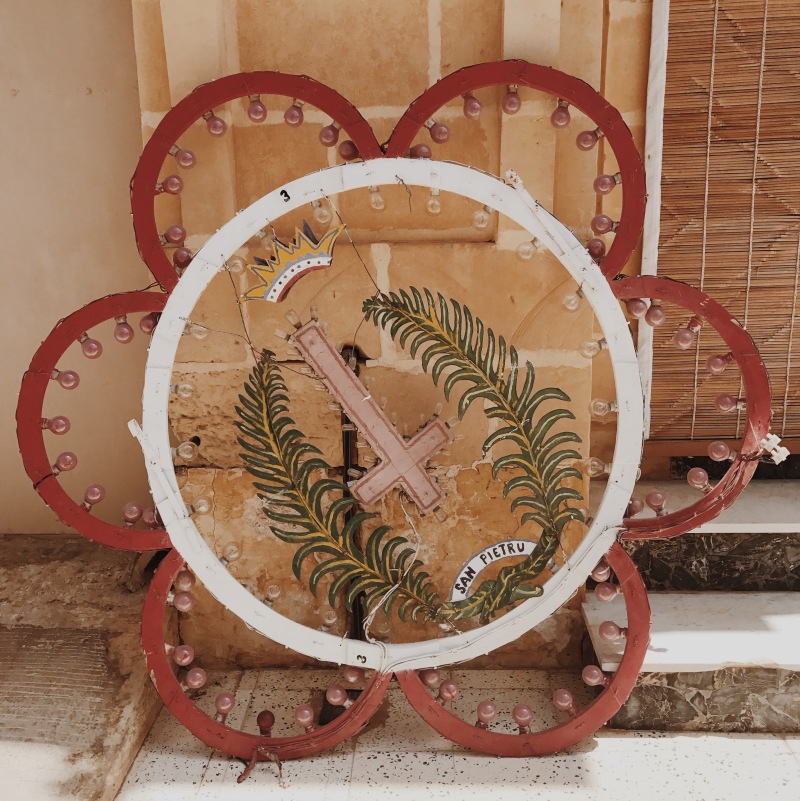 Sarah’s parents took us down to Xlendi, which was right on the coast and had swimming areas and restaurants lining the clear blue water. Boats dotted the water all over.

We took a short hike over a hill to look at a cave. As we climbed higher, the views got better and better as you could see more of the water and the surrounding landscape. The “hike” was a staircase built into the side of the hill and had a direct path down to a small cove with a cave. As we walked, small lizards ran across the path (which admittedly I was not thrilled with, since I am not a huge fan of the reptile community). Across from the hiking path was more of a walking path, where people also had access to the water. There was even a stone diving board that people were jumping off of. 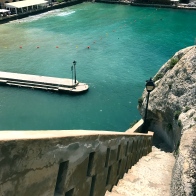 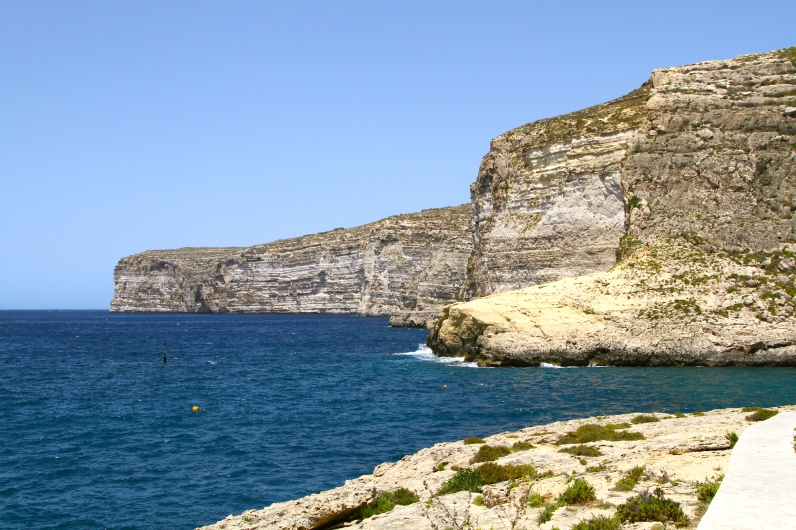 This was also my first taste of the Malta sun. I had been warned that it would be hot, but I wasn’t ready for the intensity of the sun. Granted, I was smothered in sunscreen as I always am but even so the sun worked its tanning magic very quickly. (Contrary to popular belief, my super fair white skin actually can tan; it just takes careful cultivation and copious amounts of sunscreen – without which it would burn to crisp very quickly.)

Lunchtime arrived and we headed back to Sarah’s mother’s house. Today’s menu was pastizzi, puff pastry with peas inside and a stuffed zucchini dish that I could never figure out the name of, along with some potatoes. It was all delicious, and it was at this point that I knew I was in trouble as far as eating goes on this trip because I was going to try everything and eat it all!

Lunch was followed by a quick siesta. I didn’t nap of course. I sleep so poorly all the time that I know a nap will just screw up my nighttime sleep even more, so rather than nap I was reading while looking out at the view from the apartment balcony. I will admit that I was getting sleepy, a combination of the heat as well as the jetlag, but I resisted actually falling asleep (partially because my contact lenses were in and falling asleep with them on is annoying). Meanwhile, everyone else took quick naps.

There was more family to meet and greet, so after naps we headed to Sarah’s aunt Beatrice’s house. Not only was it her house, but also her sewing studio. She makes wedding dresses, among many other things, and alters clothes. We got quick tour and she showed us a lot of the things she had been working on. In addition to the wedding dress for the wedding we would be attending, she was finishing up a dress for another wedding the day before, and completed a jacket and blouse for her mother to wear while we were sitting there talking. It was so much fun to watch the works in progress! 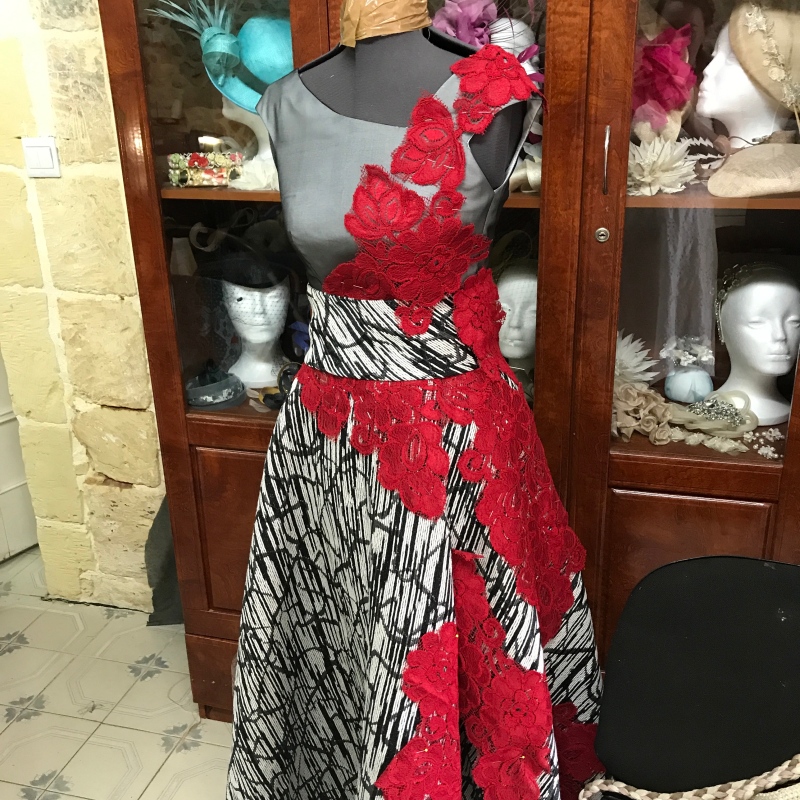 While there, we also played with Sarah’s nieces (well, they were her cousin’s children, but honetly nieces is just an easier way to say that, and I tend to refer to my own cousins’ children as my nephews anyway). They are three years old and four months old, and they were both adorable.

The studio was only our first stop for the night. We were on our way to Gharb, where there was a feast (or a festa). All the villages on the island have different feasts for different saints. The villages deck themselves out in lights and decorations and try to outdo all the other villages. As with all the other villages, the center of town features an ornate church. This one was called Parish church and it was built in 1699.

In Gharb (which means “west” in Arabic and is so named because it is on the most western shore of the island), the church was done up in lights and there was a mosaic on the floor in front of it done in flower petals. The day was very windy however, and by the time we got there a lot of the petals had been stepped on or blown away. In front of the church there was a band, which happened to be playing “YMCA” as we stood waiting… I guess the Village People are relevant in every country.

Here we met Sarah’s aunt Joan and cousin Gabby, who we would spend a lot of time with in the two weeks to follow but on this particular occasion we only met briefly. 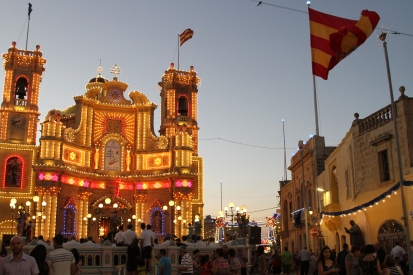 It was an uncharacteristically windy evening, which meant that a lot of the decor had to be taken down. However, that didn’t stop us from walking through the village and seeing what they did have up. As we walked, Sarah’s mom told us about Frenc tal-Gharb, who was a wise man who miraculously cured people. He left doctors confused and stunned with his use of herbs and prayer to heal people. There were a number of statues in the village to commemorate his life and work.

Dinner that night was in another town called Marsalforn. The wind was still going strong, and even though it was dark and hard to see the coastline, we could hear the water hitting the walls as we walked. We chose a pizza place called Napoli D’Oro for dinner. I was certain that we would avoid having pizza until we got to Italy, so I was surprised to learn that Malta actually had very good pizza as well. Sarah and I split the macellalia, which had tomato, mozzarella, prosciutto, cocktail sausage and sausage (I do love those pizzas with tons of meat!). 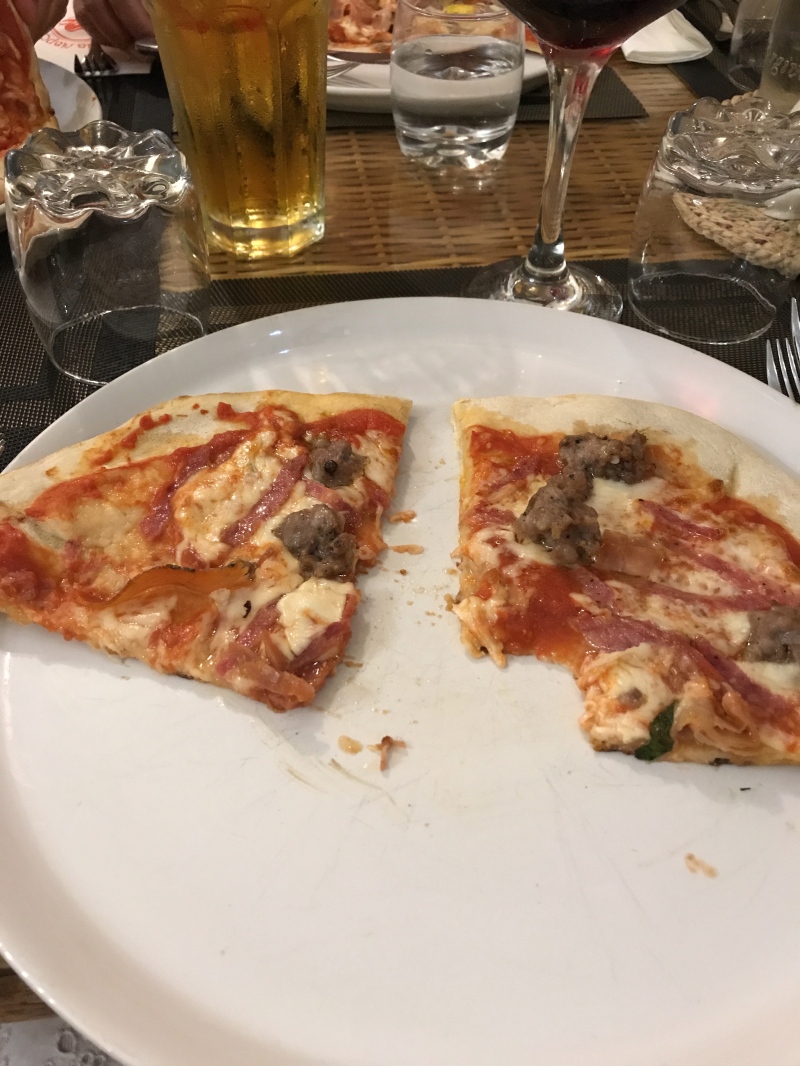 Because of the wind, and it being late in the day, after dinner we walked back to the car and made our way back to the apartment in Nadur. Our routine of sitting in the kitchen reading, writing and checking in with people back home (the kitchen of the apartment was the only place we had reliable wifi, for the most part) began before it was time to call it a day.