I have been up way too late the past two nights, not because I was out doing awesome things or getting myself into trouble, but because I couldn’t put a book down.  Once again, a novel has peaked my interest so much that I  spent hours on it the past two nights determined to finish it so I could see how the whole thing ended.

The book was called Juliet, and it was written by Anne Fortier.  I was initially drawn to it because it was hailed as a modern day Romeo and Juliet, and that it also uses some of the familiar story as background.  The tale begins when Julie Jacobs’ aunt dies and leaves her a task – to go to Siena, Italy and continue to solve the mystery of her family, research her mother had lost her life for.  Julie finds out that she is not Julie Jacobs, as she has always thought, but Giulietta Tolomei, and that the original Juliet, the one all the stories are based on, was her ancestor of the same name.  It is with little other information that Julie goes to Siena and meets a cast of characters whose ancestors were all once part of the story of the Tolomeis, the Salimbenis and the Marescottis (yes, in this novel there are three families involved). 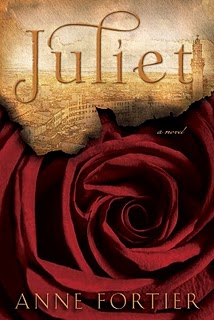 Julie soon discovers that finding the treasure left behind by her mother will not be as easy as she thought it might be.  She begins to learn other secrets, terrifying secrets, about the way her parents died, and soon suspects that she is in danger.  She feels that she is being followed, and soon becomes suspicious of who to trust.  Even so, she forges ahead, soon figuring out that she is not only looking for the treasure but also for her own Romeo.

Juliet captured me from the very beginning of the story, and that is a hard feat these days for a book.  I was instantly intrigued, and wanted to know as much about the old story as Julie did, and how is all connected to the modern day story.

The backdrop of SIena made for a wonderful setting, and when I was finished reading I instantly looked up the city and added it to my list of places to visit.  The story, though mostly fictional, was actually based on fact.  The city of Siena was once a place full of warring families, and the home of the annual Palio (which sounds like an interesting thing to see one day).

Because it was partially a mystery, I had fun figuring out the bits and pieces as I went, but was excited when some of it came as a complete shock!  For anyone who likes a mystery, or can’t get enough of connections to Shakespeare (I fit both categories), then I definitely recommend Juliet.  It’s one of my new favorites.