A couple of weeks ago, it was arranged that I would accompany my aunt Pam to Maine to pick up my cousin Katherine from her musical festival. I looked forward to this for a while, being given the opportunity to see a new place, and I never – and I mean NEVER – turn down the chance to have Maine lobster. It’s just not done. And so the Bed and Breakfast was booked and the date was set.

Wednesday morning we headed out, bright and early. After a quick Starbucks stop we were ready to hit the road in full force, not realizing just how far Blue Hill, Maine was from New York. It was a solid eight hours of driving, and an impressively small amount of stops (two). We packed our own food, knowing we would be eating like kings that evening, and so we didn’t stop to eat along the way.

Of course, as we got closer to the final destination (which was actually the Brass Fox Bed & Breakfast in Penobscot, Maine) we grew more and more anxious to get there, and to see Katherine, who has been at this festival since June. It was almost four by the time we finally reached it, and check in was incredibly easy as we were shown to the room and immediately were able to change and get going to meet Katherine at the Blue Hill Wine Shop in town. 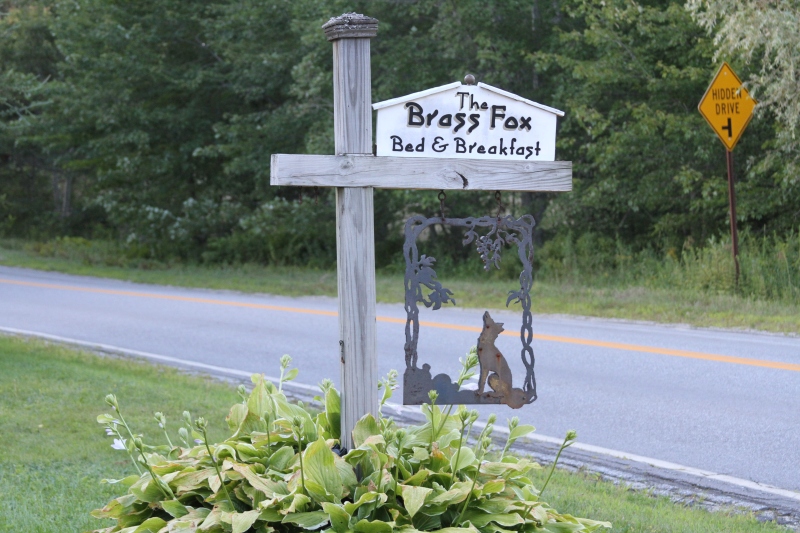 The Wine Shop was lovely, and featured tons of wines. I know nothing about wine. My general criteria for buying is that the bottle needs to be less than $10. So after using that as the main selection process, we headed over to Surry, Maine, to go to The Lobster Shack. 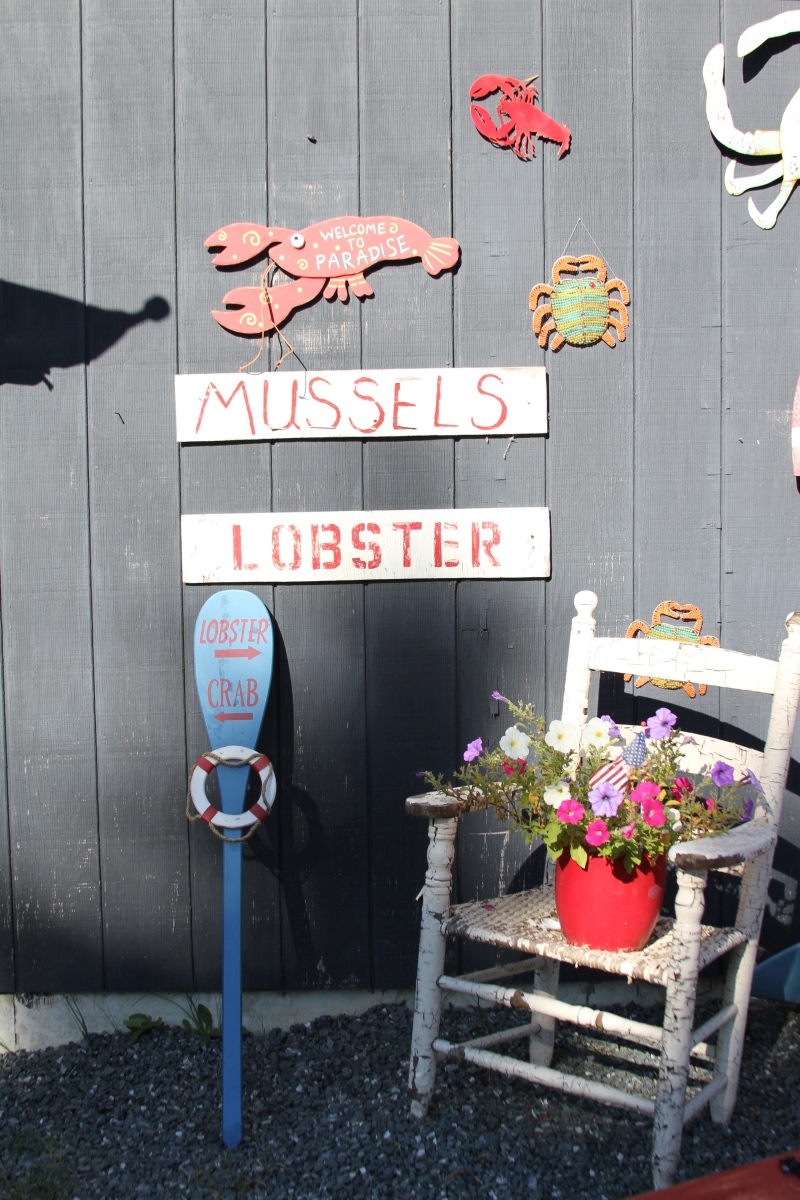 Let me tell you about the Lobster Shack. It is what it says it is – a shack for lobster, with a pier with picnic tables to eat. Lobster boats sit in the water surrounding it, and people can ride their boats right up to it in order to get lobster, and then head back out. It’s awesome. Of course, I love being near water and boats in general, so it’s almost a guarantee I’ll like it. I always say it’s the Pisces in me; that I’m just a fish out of water all the time. 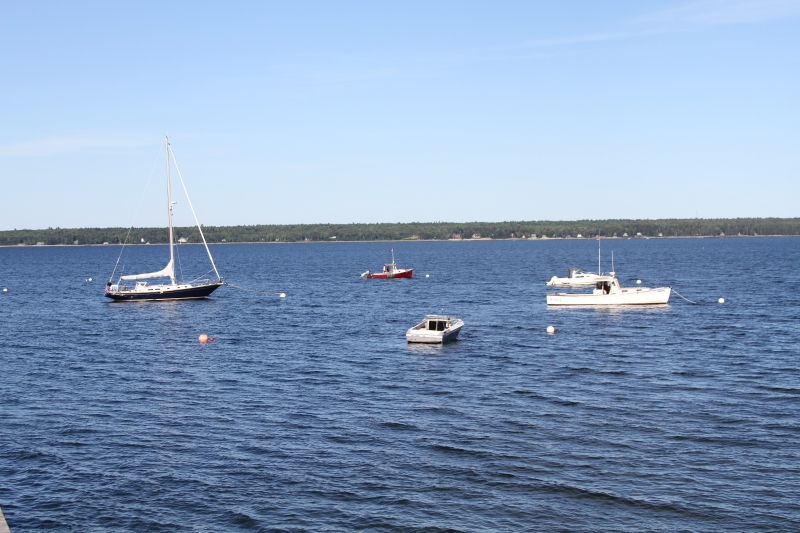 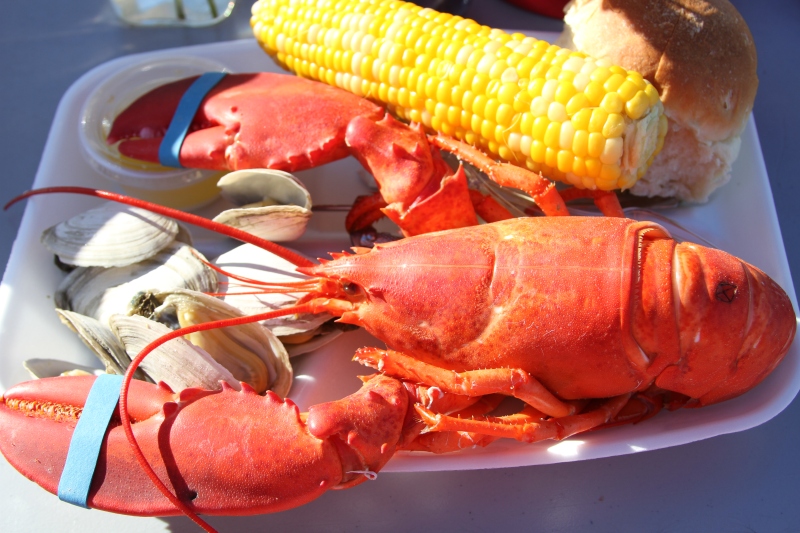 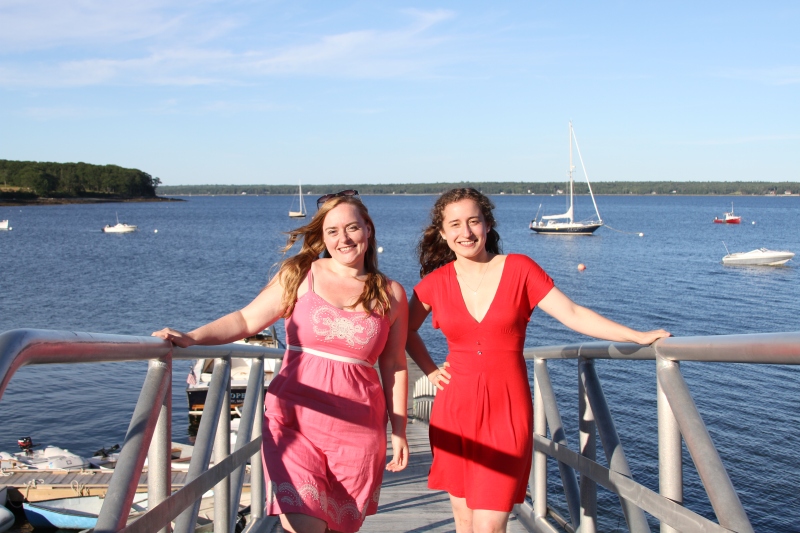 We ordered crab dip, lobster and ice cream, all awesome. As I said before, there’s nothing like getting your lobsters from Maine, where they come completely fresh. The ice cream was made locally as well, though not at the crab shack, and we tried a multitude of different flavor, eating entirely too much ice cream than is good for one person!
After dinner, we took Katherine back to Kniesel Hall, where she gave us a tour of the performance and practice rooms and showed us her dorm.

From there, we went for a little walk to what I believe was Blue Hill Bay. Honestly, it doesn’t really matter what it was called; it was beautiful, just like every other vista in Maine. 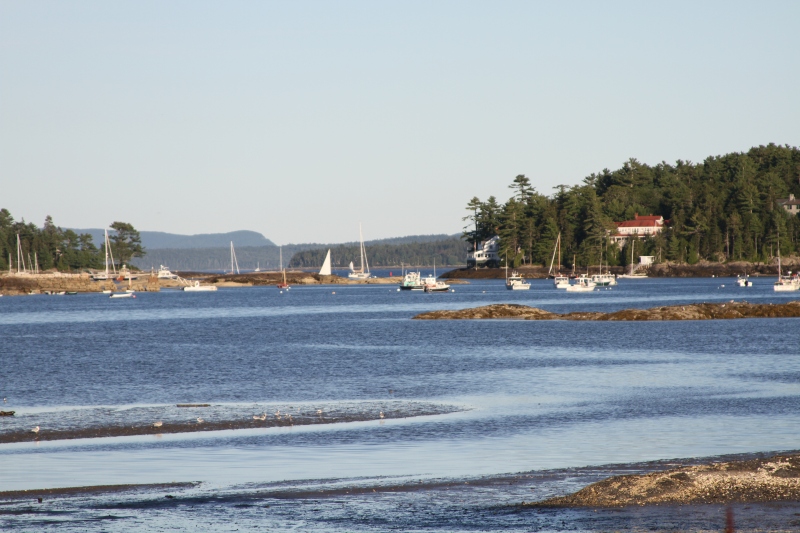 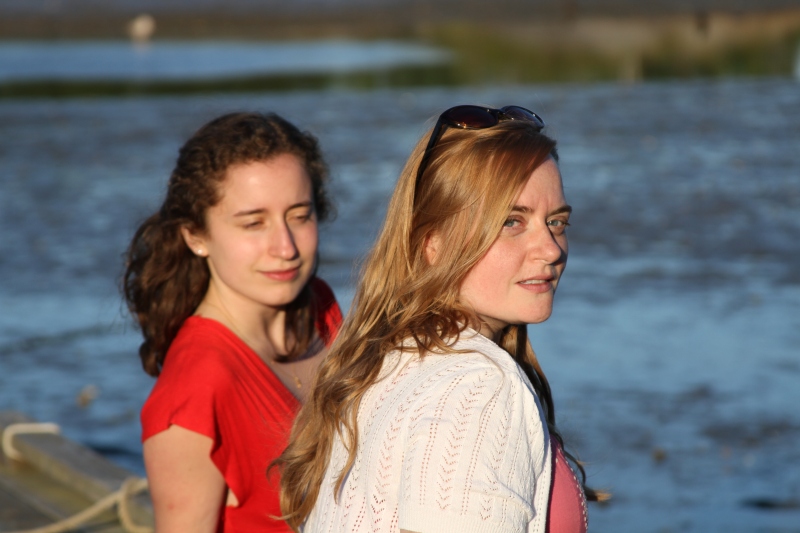 And then it was off to “the rock,” which is exactly what it sounds like – a giant rock. In high tide, it would be surrounded by water, but as it was low tide we could walk out to it and climb to the top, looking out at the bay again, but from a little bit closer. It was slightly chilly, but otherwise a perfect evening.

Being exhausted, we headed back to our respective sleeping quarters – Katherine at Kniesel, where she planned to take a nap before that evening’s concert, and Pam and I back at the Bed & Breakfast, where we actually fell asleep relatively early. It’s strange how being in the car all day makes you so tired.

Thursday morning we woke up early, having been told breakfast was at eight o’clock. We headed downstairs, where we met the other two guests, musicians from Boston and Maryland, and friends of the inn owners. We had very pleasant conversation with them during breakfast, though they definitely had more in common with Pam than with me (being hopeless in the classical music department). The breakfast was amazing – waffles with whipped cream, maple-pepper glazed bacon, fresh squeezed orange-mango juice, and coffee. (And with all that, I feel like I’m leaving something out.) I had no problem eating a gigantic breakfast that wasn’t remotely healthy for me, especially as it became more and more clear we wouldn’t be returning to the Lobster Shack that evening – it started to rain.

It continued to rain as we left the B&B and drove to Stonington. The rain would let up, and then pick up again, making it difficult to really do anything. Even so, we braved the chill and the wet and trudged around Stonington as much as we possibly could. It was a cute little town, with an adorable little opera house, that I really would’ve liked to have seen a show in. Being a coastal town, it was full of lobster boats and the cute gray houses that align the coastline in most of Maine. The town had a lot of little gifts shops, where Pam and I actually had to buy sweatshirts, because it was much colder than we anticipated when we left that morning. 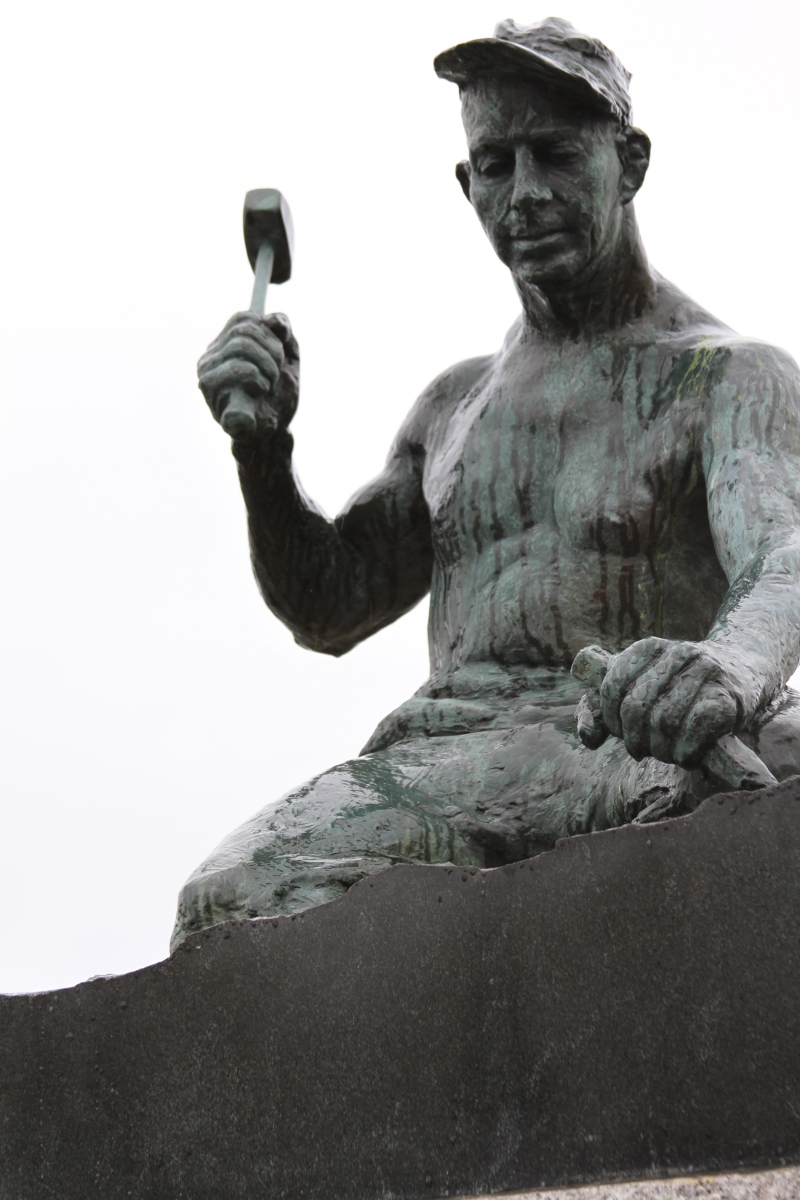 The gloomy weather made for nice pictures, however. It was also a nice coffee atmosphere – when we returned to Blue Hill we got lattes and killed time until we had to go to Katherine’s marathon chamber music concert.

And a marathon it was. It was over three hours long and for one who prefers classical music as background (don’t know why but I just prefer to have it on while reading, rather than watch people play it), I got tired quickly, especially when Katherine wasn’t playing. Even so, I amuse myself at these classical music concerts by telling myself little stories that go along with the music in my head. 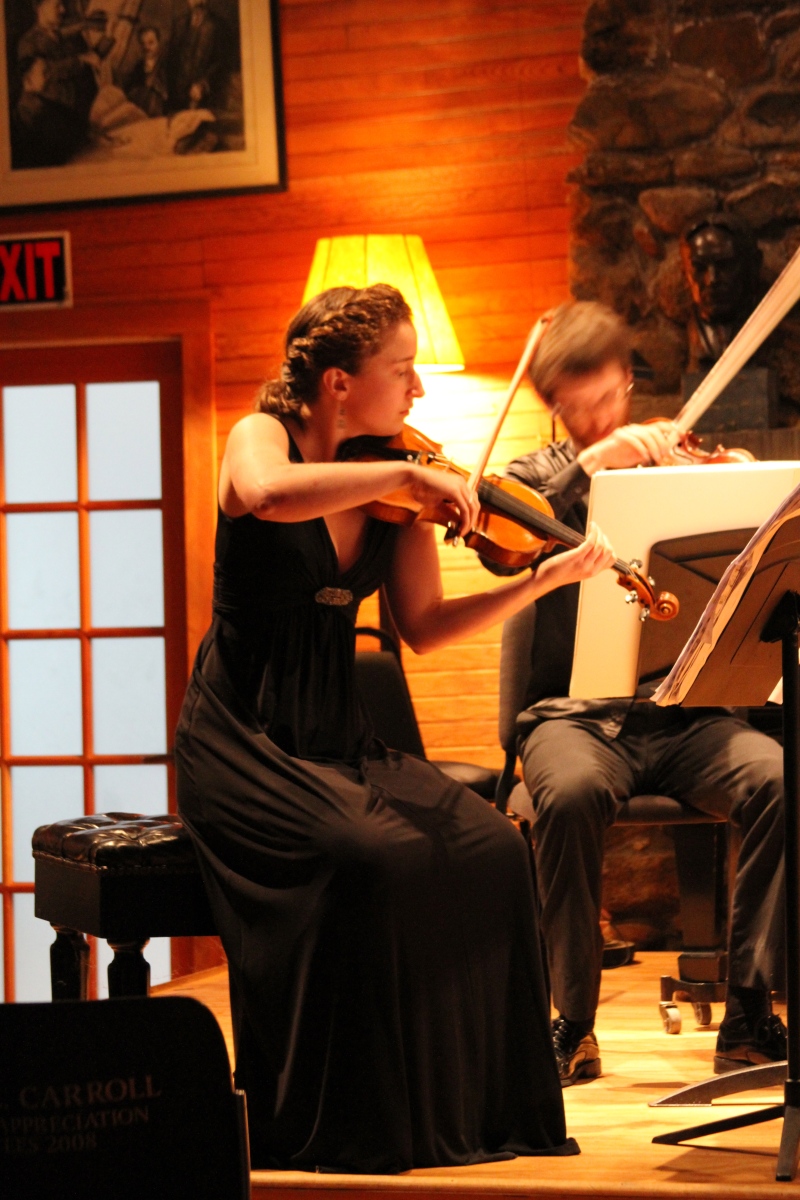 Once the concert was over it was time for dinner. Because of the weather, we opted for indoor dining and went to the Barn Castle Inn on Katherine’s recommendation. It was no Lobster Shack, but it wasn’t too shabby. Then, because Katherine had to return for another concert, we turned in early again, but I stayed up to watch Project Runway.

In the morning, we had another really nice breakfast of peach soup, sausage bread pudding, orange grapefruit juice, muffins and coffee. We chatted with the other guests and then said our goodbyes. It was pouring rain again and we had a long drive ahead of us. If only we knew how long. Our lovely two days in Maine ended with a nearly ten hour car trip filled with rain and traffic!

Even so, it was a nice little sojourn, and now it’s back to Brooklyn and back to normal.