For this post, I am going to use mostly the journal entry I wrote on the plane the day after it happened.  I may need to add in a detail or two, but I looked it over and it seemed pretty thorough and very “in the moment” so I thought it was better than just me remembering what happened.  However, keep in mind that I did write it while very tired on the airplane.  Also note that I wrote the entry the day after it happened, so any references to “yesterday” are still referring to the fourth day of the trip.

The journal entry will be in block quotes.  Anything I add in now, I’ll put in regular text.

Yesterday was our optional excursion day and we chose to go to Landmannalaugur, which is more inland.  I would need to look it up to see where exactly but it’s within the crater of a volcano, I believe.  We chose it for its scenery and were not disappointed.  The whole thing looked like a painting or a postcard, that’s how picturesque it was.

I just learned these quick facts from google while I was looking it up on the map: “Landmannalaugar is a place in the Fjallabak Nature Reserve in the Highlands of Iceland. It is at the edge of Laugahraun lava field, which was formed in an eruption around the year 1477.”

In order to get there we had to get up early and meet a tour bus.

We met this tour bus in a gas station in Reykjavik after a very confusing morning of not being sure if we were in the right place.  Then we weren’t sure we could leave the car just parked in the gas station all day but in the end decided to risk it.  (Either that or it was fine the whole time and I am just thinking about New York and how you would never be able to leave your car at the gas station all day without suspicion.)  The other confusing part was that multiple tour buses came through and we weren’t sure which one ours was supposed to be.  Finally, however we met our tour guide Anna, who would travel with us and take us on our hike.

This bus took us on a crazy off-roading journey through a valley surrounded by mountains, valleys filled with grazing sheep, water periodically.  I wish I could’ve taken a picture of everything but it will have to exist, for the most part, in my memory.

I did manage to get a picture of this sheep on the road, but that’s about it!  While most people were asleep, I couldn’t help but watch the landscape (and also read, cause I had started a new book that morning… finished by the time we got back to Reykjavik later that day…).

We arrived at the campsite and spent some time there, making sure everyone got to the bathroom.  Our guide has us all introduce ourselves before we set out, so that we had a general idea of who everyone was.  We represented a few different places, but most of us were American.  This was another one of those places that looked really, really cool for camping.   Apparently the hike we took was not the only one you can do in this area, so there’s lots more to explore. 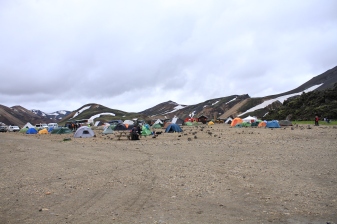 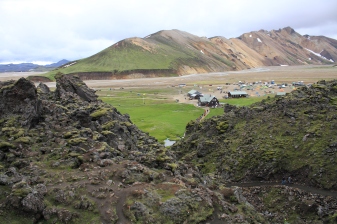 We arrived at the campsite and began the hike.  As we walked we got to know the other hikers and met people from Thailand, Minnesota, Kentucky, Canada and then, later, France (we’ll get to that part).

The hike was gorgeous, but pretty difficult as hikes go – not like crazy rock climbing style but we did climb OVER a lot of rocks.  I definitely needed better shoes for that but I managed.

The first part of the hike was more of a walk.  It wasn’t too steep and we stopped often to make sure the group was together and to set a pace.  Also, we had traveled for so long it to get there it was getting near lunchtime, and we were also looking for a place to stop and eat.  As we walked, we enjoyed the sights around us.  This was one of those unreal feeling places, where the pictures don’t do it justice and you can’t believe you’re standing in front of something or within something that actually exists. 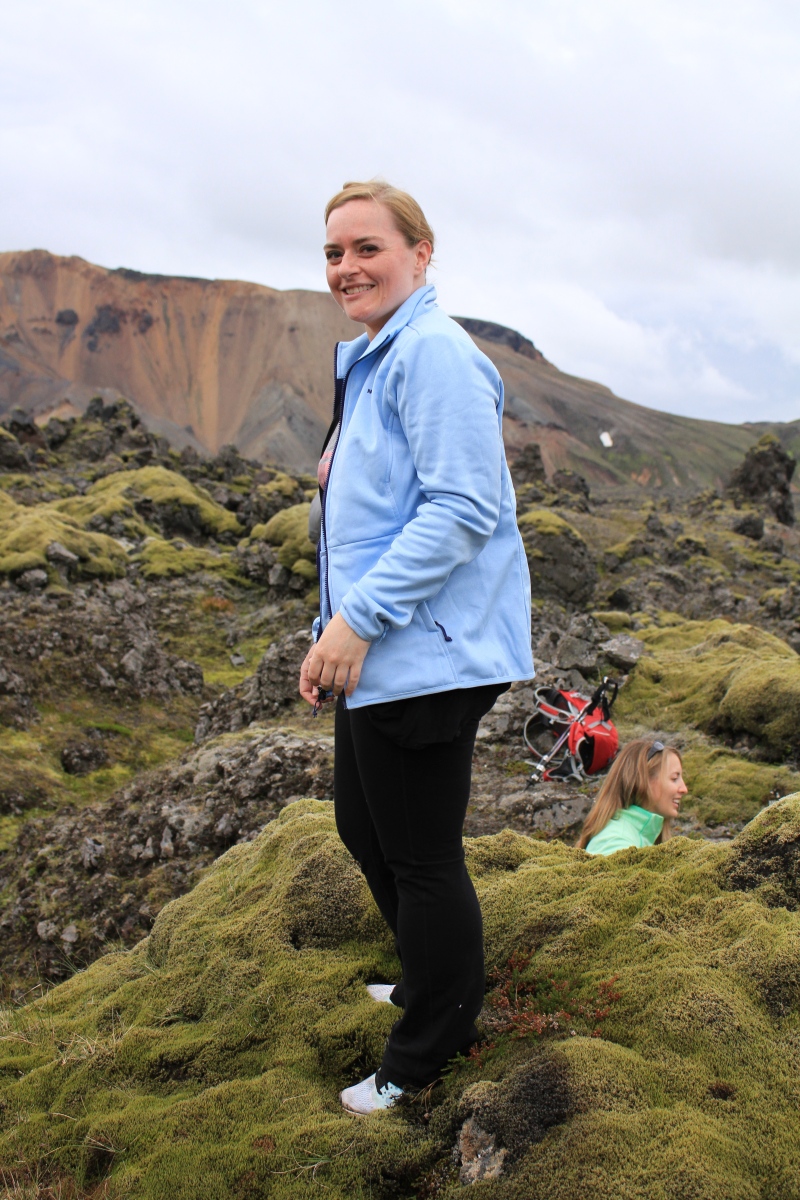 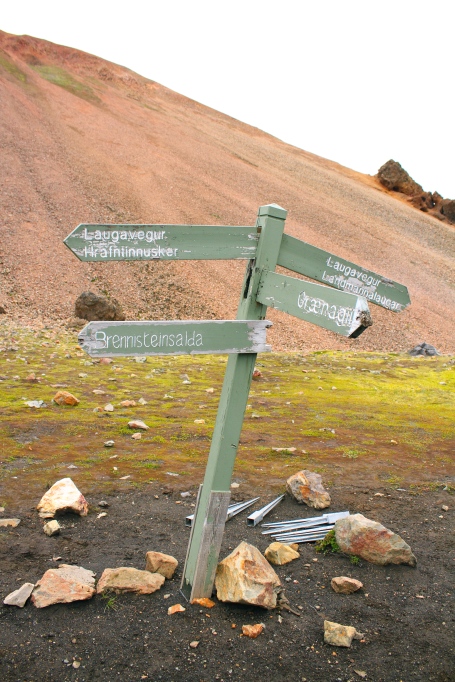 After about a half hour into the hike, we stopped for lunch, just off of the trail.  We found some more of the squishy moss to sit on, had a quick bite to eat, and then we were off, knowing the tough part of the hike was yet to come.  Things started to get really steep, really fast, and I remembered the love/hate relationship that I have with hiking: the uphill battle really sucks, but there’s nothing that beats the feeling of getting to the top.  Not to mention the fact that you truly feel like you’ve accomplished something, exercise-wise.  Whenever I hike, I think about how much more I would like to hike.

When we reached the top we were rewarded with one of the best views.  Everything we had seen on the ground in the car we could now see from above and it was amazing.  Standing on top of a mountain you just climbed it an awesome feeling.  We stayed up there to enjoy he view and the breeze for a while. 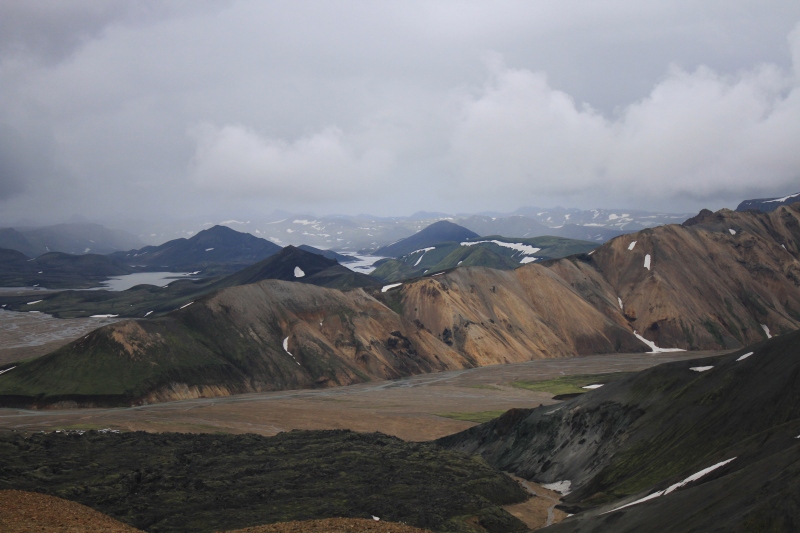 It started to get chilly now that we were standing idle, so I was once again glad for the layered jacket that I had.

On the way back down, it started raining again.  Like, pouring, and we were meandering through and over rocks and mud and it was still AWESOME.  Felt like a true adventurer, and when we got the bottom I was tired but really proud of myself (and super hungry).

We returned to the campsite about an hour and a half before our bus was supposed to take us back.  We tried to get on an earlier bus but to no avail.  We had to wait until six.

It was still raining so we hung out in a converted green school bus made into a seating area.  To kill time before the bus game, we started playing Twenty Questions, which resulted in hilarity.  At first, it was just our group, but then a French couple joined in and stumped us with “purple.”  As more and more people came in, they joined in and we all laughed and talked.  It was thirteen essential strangers hanging out together in the middle of nowhere in Iceland, laughing and talking and playing a game as we all tried to escape the rain.  I can’t even really describe how I felt during the experience – all I know was that it was a priceless moment!  One that will never be repeated although the feeling can be recaptured.  I wanted to write it all down as soon as possible because I always want to remember it and be able to tell people about it for many, many years – the time I played Twenty Questions in Iceland in a green school bus with thirteen strangers.

I will likely never cross paths with nine of them again, but this happened and it was brilliant.  And despite everything we saw and everything we did, this will go down as my favorite moment of the trip.

I don’t have pictures of that bus (picture a green school bus without the seats inside, but benches lining the walls), but the above picture at the top of the mountain shows most of the group that was playing Twenty Questions.

The bus finally arrived to take us back to Reykjavik.  Again, most people slept, but I read and watched the scenery around me, despite being tired.  It was a long, bumpy road back and when we got there we needed to figure out dinner.  Finally we landed on tapas and drinks at The Public Market (which I don’t think was the name of it because I can’t find it anywhere online, but that’s what I wrote down), and just relaxed.  We were all tired and unshowered from having gotten back so late.

Back at the house, it was time to pack and get ready to go.  We needed to leave pretty early for the airport and no one wanted to be late.

Despite some minor setbacks, it really was a great trip and I am glad that I took it, and had a new experience.  It was such an impulsive decision back in June, and I had no way of knowing how it would turn out.  However, it ended up working out very well, and I have a new place in the world that I want to visit over and over again.  I can’t wait to figure out my next destination – Malta has been discussed, but is not yet in the works, so we shall see!