On our second full day in Rome, we conquered.

Our morning was pretty leisurely.  We slept in, gave our legs a bit of a rest, and had breakfast, where we made a plan for the day.  Quick learners, we knew that we didn’t want to be outside in the heat of the day, and so we decided to visit some museums so that we would be out of the sun for the early part of the day, and then head to the colosseum around 3:00 when hopefully the sun would be a little less intense.  We were also promised shorter lines and less crowds by the guidebook if we went after three, but let’s just say for now that guy’s filthy liar.

Our first stop was the National Museum of Rome, a nice, quick walk from the hotel.  Today we had the opportunity to walk in a different direction than we had been walking which made for a nice change of pace, and new things to see.  It also gave us a chance to see how long we needed to walk to Termini Station, since we needed to be there very early the next day for our Amalfi Coast tour.  We were happy to learn it was only about ten minutes from the hotel on foot.

The National Museum of Rome is actually many different buildings, spread throughout the city.  We were in the Palazzo Massimo alle Terme which had statues and sculptures on one floor, frescoes and mosaics on another, and in the basement a collection of currency as well as a frightening mummy of an 8-year-old girl.  The museum was a nice place to be early in the day, and off the main tourist path.  There was barely anybody in the museum which was a nice change of pace from the previous day’s museum trip.  We were actually able to walk around and see things, and linger and look at statues that we liked.  We started from the bottom and worked our way up.

For the most part, I prefer sculptures to paintings (as you might be able to tell from the fact that I took a ton of pictures of statues and virtually none of anything else while we were at the museum).  There are plenty of paintings that I like, but I tend to be very specific and prefer the Impressionist painters.  Sculptures don’t fall into the same specifics for me – I am always impressed by them, and the more intricate, the better.  I am fascinated by the way sculptors create them (though I’ve never seen a sculptor at work), and I particularly like looking at all the little details. 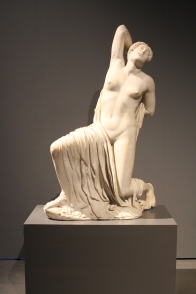 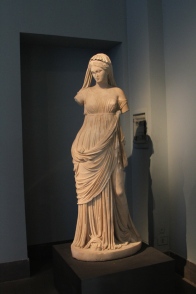 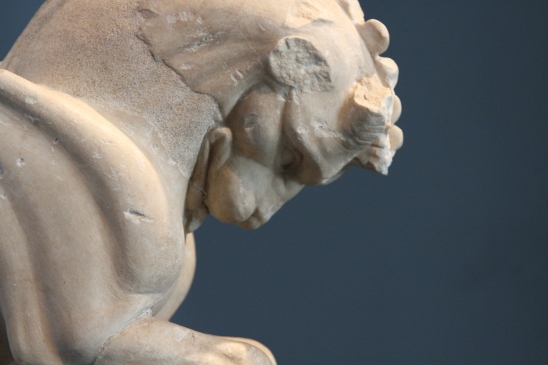 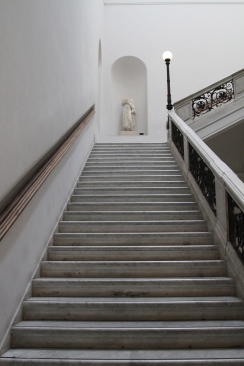 We spent about an hour wandering the museum.  From there, it was time to start making our way down to the colosseum area.  As we walked, we did some window shopping and then made our way into the neighborhood with all the capitol buildings.  As we approached, we passed a church where a wedding was just letting out, and we caught a glimpse of the bride in the getaway car, and I had the be the creeper to take a picture of a wedding I had nothing to do with.  This was also just before our daily gelato stop, at which I tried lime gelato with red pepper.  Flavorwise, it was great, but it was more of a sorbet which is not my preference, texture-wise.  I think the creamier consistency of a gelato would’ve worked better with the pepper.

The Capitoline Hill section was definitely my favorite part of Rome.  There were still crowds, but they seemed more spread out than they were in the smaller squares of the Spanish steps and the fountain, and there were beautiful things to look at everywhere.  In some of the other sections, the various sites would be surrounded by shopping, whereas here there was just one impressive building after another.  We saw the Palazza Venezia, Trajan’s Column and the impressive – and ENORMOUS – Vittorio Emanuele Monument.

We enjoyed just taking everything in and walking up to the top of the monument (well, not the very top but as far as you could go on the steps outside), and looked out over the Piazza Venezia.  The monument itself was built to honor Vittorio Emanuele, a king of Italy, and it was completed in 1925 so I suppose you can’t say that this was part of ancient Rome.  Apparently there was some controversy because some ancient buildings had to be destroyed in order for this building to exist.  Either way, it was impressively large and displayed columns and statues. 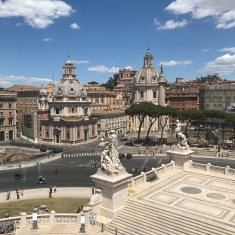 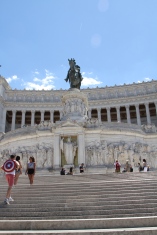 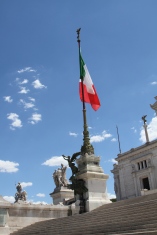 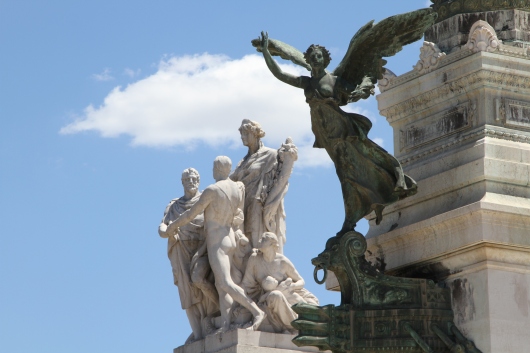 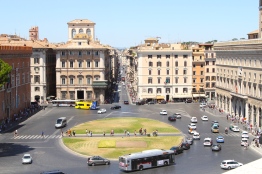 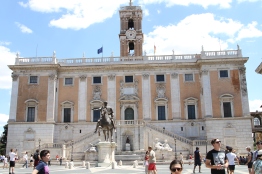 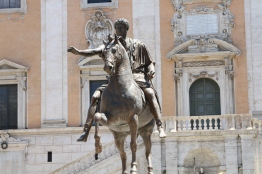 After some initial confusion about the layout of the museums (it’s two buildings across from each other in a piazza, with connections in the basement), we got the basic idea of moving through the museum, looking at all the different sculptures.  Rome is definitely the place to be if you like sculptures!  They’re everywhere.

As part of the sculpture display, the museum had rooms and rooms full of busts.  They were hard to identify as they all shared one plaque at the front of each room and weren’t individually labeled.  I gave up on the plaques and just appreciated the sculptures. 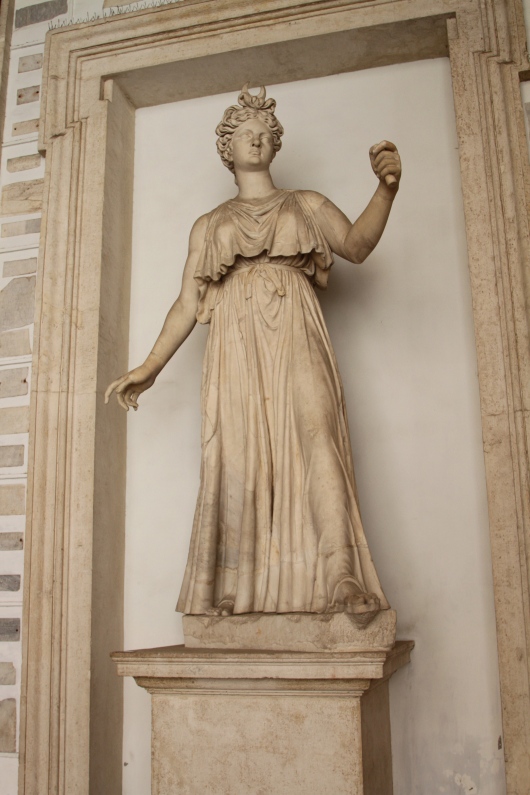 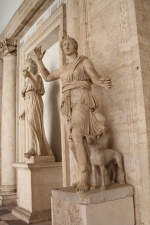 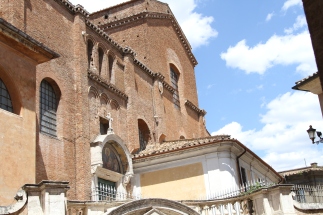 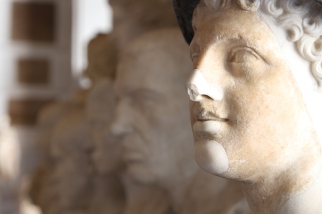 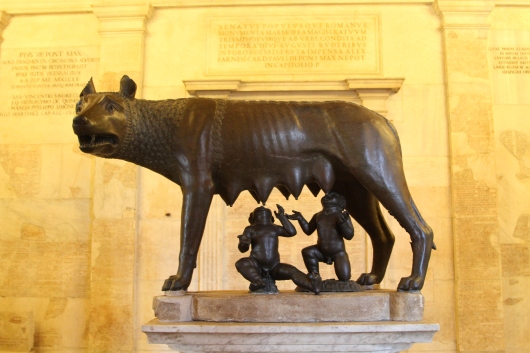 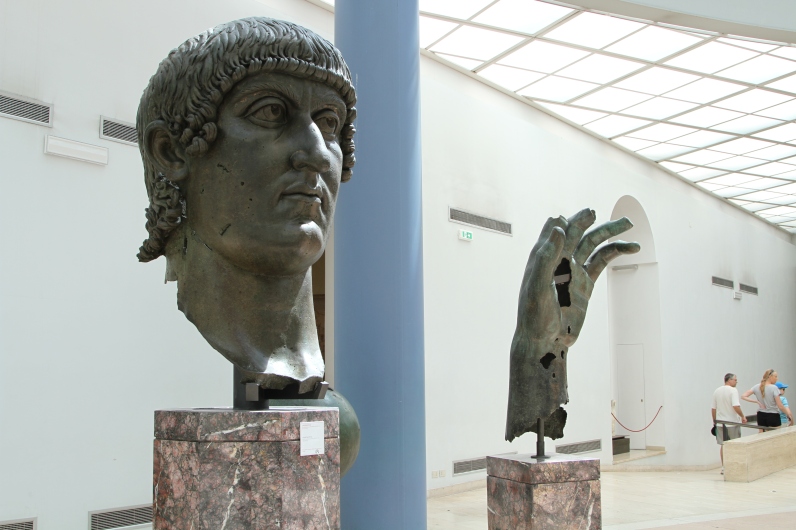 Behind the museums there was a view into the Roman Forum, with the colosseum in the distance.  We decided we had given it enough time and we started walking.  Somehow we managed to do this at the hottest part of the day, and it was at this point that my blister from the day before started acting up.  It had been pretty good all day, but just as we reached the colosseum area, it decided to burst.  Granted this was not really a big deal, but I did have to stop and make sure it was covered with band-aids before we kept walking.

I will say that the colosseum line wasn’t too bad.  Waiting was the right idea.  However, inside it was crazy crowded and almost all in the direct sun.  We actually found a place to sit for a little while before truly exploring.  The rest was definitely the right plan: I was getting hungry and tired and sitting for a little while gave me the stamina to deal with the crowds and actually get to enjoy some of the colosseum.  However, we did make the mutual decision at this point that since we got an overview of the forum, we didn’t really need to go into it. 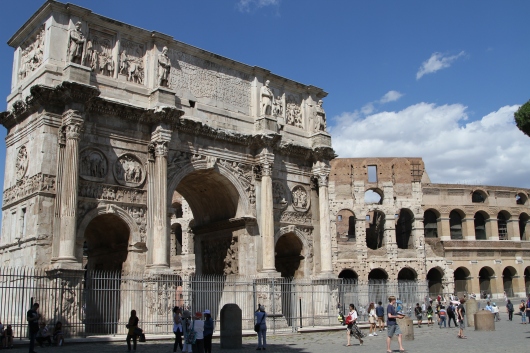 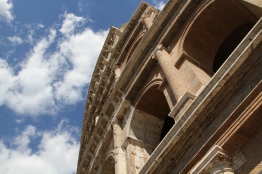 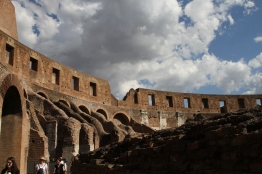 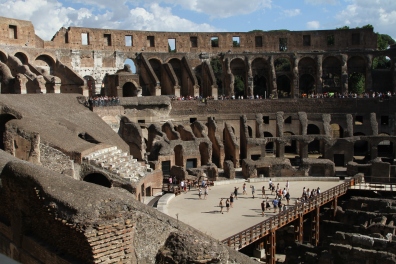 The colosseum is one of those things that you just have to see at least once in your lifetime.  Preferably looking less like a super tourist (as you can see from the top right photo above, with the soccer mom purse, plastic shopping bag that I tied to the purse when I got tired of carrying it, giant hat and camera in my hand… not my finest fashion moment…).

I was so hungry when we left the colosseum that we decided to just eat right outside of it.  We knew this was likely a touristy move and the food was not going to be as good as other places, but we both needed the food and the time to regroup before our walk back to the hotel.  I got the usual aperol spritz and a pizza: this time with bresaola, parmesan and arugula and it was pretty good, actually.

It started to cool down on the walk back and it was pleasant to take our time getting bak to the hotel.  Even so, we wanted to be back on the early side, since we needed to meet our Amalfi Coast tour group the next day by 7:15.

I know that my posts about Rome have been a lot of complaining about the heat.  While it was intense and it could be stifling at times, it didn’t mar the fun of the trip and getting to see all these sights I had only seen in pictures for so long.