“Positano bites deep. It is a dream place that isn’t quite real when you are there and becomes beckoningly real after you have gone.” -John Steinbeck

Positano entered America’s radar in the 1950’s when John Steinbeck wrote about his visit, one he took to escape the heat of Rome (see, it wasn’t just me) for Harper’s Bazaar.  However, I’m sure it would’ve been discovered sooner or later because it’s just that damn charming, and I didn’t get to see nearly enough of it while we were there for just a few short hours.

But I’m getting ahead of myself.  Let’s go back and start at the beginning.

We’ve had our Amalfi Coast tour scheduled since the day we booked the hotels for Italy.  I found it at Walks of Italy, and after reading the itinerary, which included a limoncello tasting at a grove above the coastline, I knew it had to be part of the trip.

Being as the Amalfi Coast is not exactly Rome’s neighbor, we had to get started bright and early, and meet our tour guide at Termini Station by 7:15 a.m.   We had to hightail it out of the hotel before the breakfast began so we thought ahead and picked up some fruit the night before to bring with us.  It was also good that we mapped out the way to get there the day before, so we didn’t get turned around and lose time trying to find the station.

Finding the group was easy.  There were about fifteen of us total, nine in one group (ours) and eight in the other.  We were technically traveling in two groups but for many of the activities we would all be together.  Our tour guide was Andrea, who made sure to point out that Andrea was a man’s name long before it was a woman’s name.  He led us to the train and we got our first taste of Italy train travel.

The ride to Naples was about an hour and ten minutes and very pleasant.  Naples, however, was insane for the five minutes we were there waiting for the van that would take us to Positano.  Naples did not seem like the sort of place you would want to spend a lot of time, but I hear the pizza is to die for, so it’s probably worth the crowds.  But, as we didn’t get to eat any pizza, my impression of Naples is more or less of a graffitied traaif jam.

As we drove out of Naples, we were soon able to spot Mt. Vesuvius, which Andrea kept calling “the vesuvius.”  It was smoky in some places, but apparently it’s completely normal that there are random fires on it, and on some of the other hills in the Amalfi Coast.  Andrea was excellent, and would fill us in on the history and legends of where we were driving, including what the area is known for.  As we drove through the mountains, he told us that they were known as the “milk mountains” for their production of mozzarella cheese.  As we got closer to Positano, we also learned of their production of lemons, olive oil and dry white wines.

Our drive took us past the Sorrento Peninsula, which we were able to stop and view from above.  If I ever have the good fortune to be in Italy again, I want to spend more time on the coast.  Every place we went on this trip that involved water in some way made me really happy. 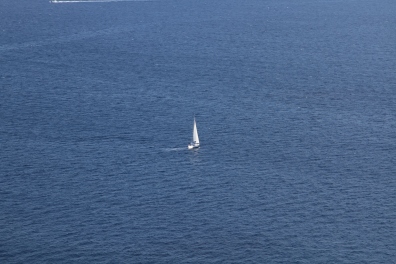 We finally arrived in Positano, where the driver meandered through the one main road until he dropped us off at a parking lot.  We continued to make our way through the vertical town on foot, maneuvering down the curves and staircases built into the cliffside.  All along the path were small shops and restaurants and everything had an scenic overlook to the ocean below.

Positano is so beautiful.  I loved walking through the narrow lanes.  Andrea left us at the beach with about two hours of free time to do as we pleased.  Sarah and I wanted to try everything we possibly good in this short amount of time so while we walked out onto the beach, we didn’t go in the water.  Instead, we headed back up the way we came to check out some stores where we wanted to get some souvenirs.  I also insisted on picking up a lemon pastry that one of the bakeries was known for. 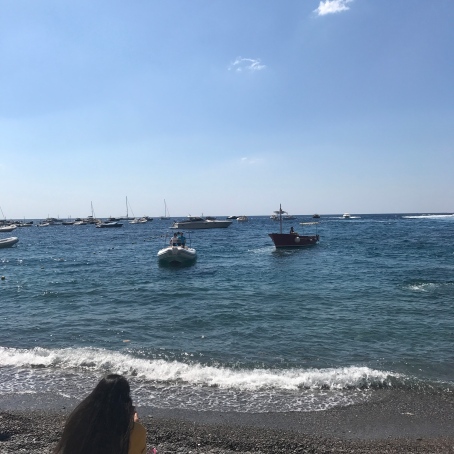 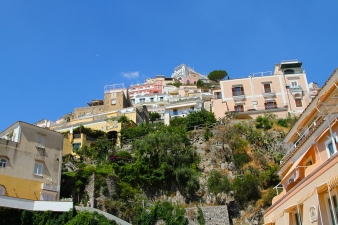 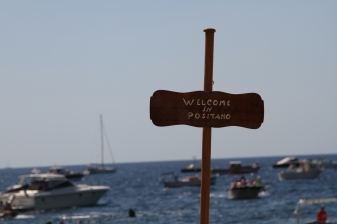 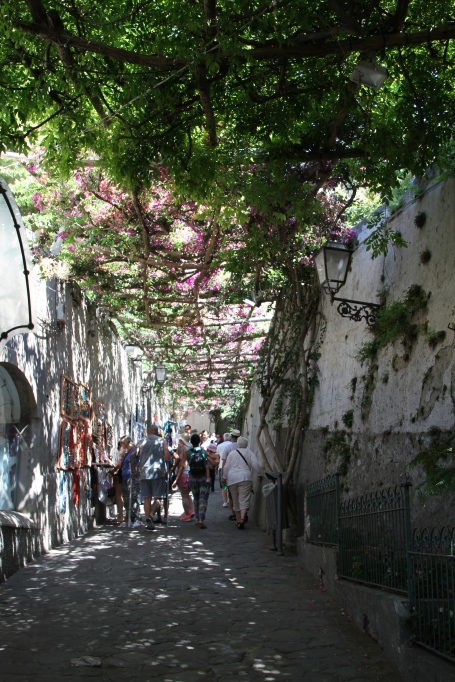 Lunch was at Chez Black, which was highly recommended by the tour company.  They didn’t open until noon so we had to make sure we were there as soon as they started serving food so we could meet up with the group on time.  I was all intent on getting spaghetti with clams, since we were in an ocean town, but I ended up trying the pasta with cuttlefish ink.  To my surprise, this meal came with a bib!  I soon learned why, as the black cuttlefish ink would easily stain if it got on the clothes I was wearing.  Here is where I also admit that I ordered it not having any idea what a cuttlefish was.  (I looked it up later.  It’s a type of octopus, which didn’t surprise me – I think I inherently knew that being as it involved ink.)  I also discovered a new wine that I love: Greco di Tufo.

After lunch we had to meet up with the group and get on a boat which would whisk us to Amalfi Town.  The boat ride was fantastic.  We were able to see a bunch of town on the coastline, something you would never be able to see if you traveled by land. 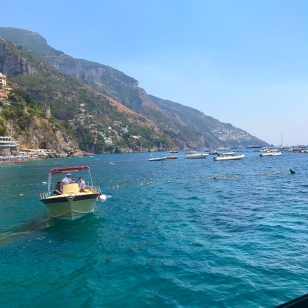 Amafli Town, like Positano, is set into a hill, with everything going upwards and it is just as charming from the water.  The lemon grove was nestled into the hill, and we had to climb up many staircases to get to the farm.  Once there, we had a tour where we saw many varieties of lemons, including the native ones to Positano, which were huge.  At the end of the walk, there was a limoncello tasting that also included fresh lemon slices that you could just eat like an orange, lemon cake and lemon water.  Everything was delicious and amazing, and the views were incomparable.  You could see the water and the rooftops below. 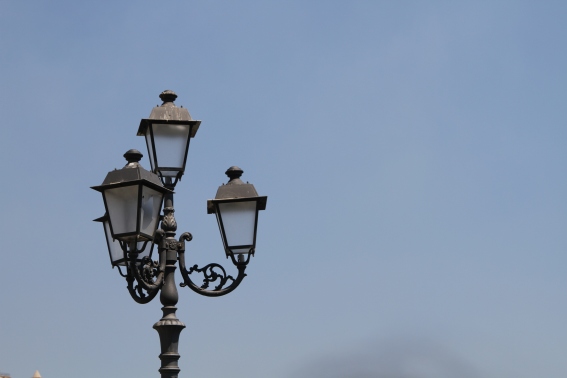 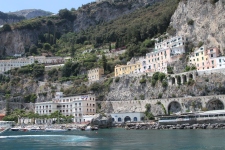 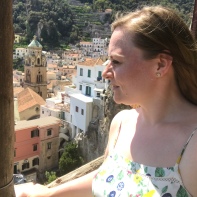 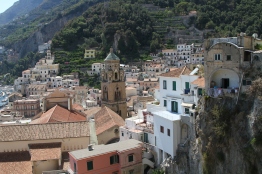 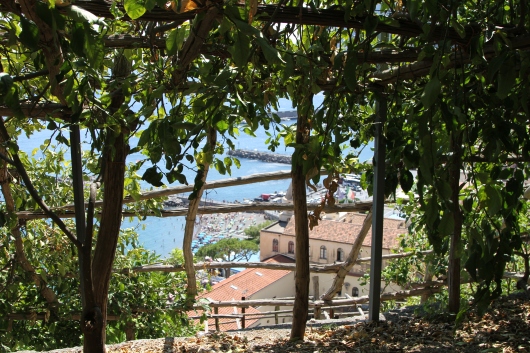 When the tasting was over, we had free time in Amalfi Town before we had to get on the boat again.  This meant: gelato time!  In addition to trying as many different flavors as I could, I always wanted to eat gelato in as many different cities as I could.  Today’s flavors: orange-chocolate and panna cotta (I believe – I remember most of my gelato but there are a few scoops I can’t remember).

The town is small and charming, and we stayed mostly in the main square which, like so many cities, has a church at it’s center.  The rest of it is mostly shops, including the farm store for the lemon grove we visited.  As we only had about twenty minutes, we got the gelato and shopped around a little bit.

We met back up with the tour to catch our second boat of the day.  Our final stop for the day was in Salerno, where we would board the train that would take us back to Rome.  As we waited on the platform, we ate buffalo mozzarella cheese and drank prosecco that the tour guides provided for us.  You don’t know how happy it makes me to say that one of my life experiences is now drinking prosecco on a train platform in Italy! 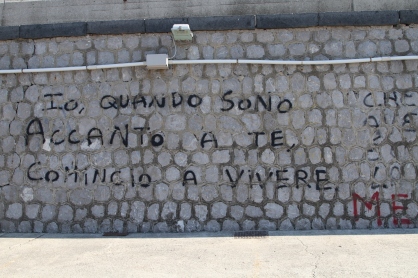 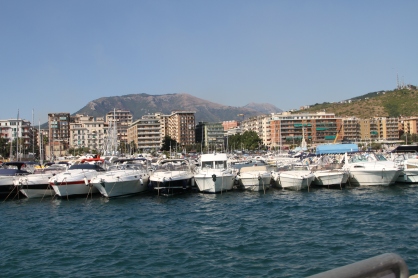 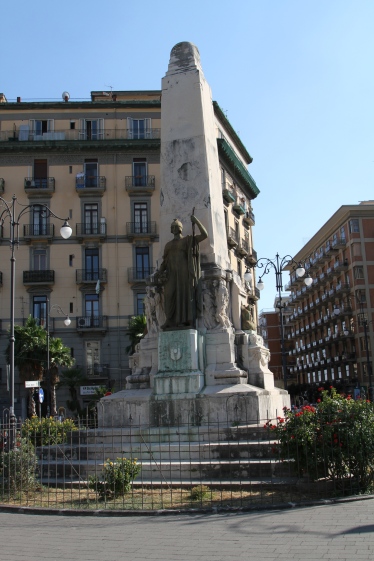 The train ride back to Rome was quiet and uneventful.  We said farewell to our groupmates back at Termini Station and then headed back to the hotel.  We were both looking forward to relaxing and getting to sleep in the next morning.  However, the Amalfi Coast trip will always be one of my favorite memories from this trip, and I have learned that I will never say no to a free limoncello!

And if you’re so inclined, John Steinbeck’s essay on Positano is worth the read.  Access a PDF of it here.