NOTE: This is a repost from 2013, so keep that in mind while you are reading as I didn’t make any changes to the original content and may make reference to various things that are out of date.  I am continuing my series of reposting various old handmade Halloween costumes until this year’s Halloween costume makes it’s debut.

This SHOULD have been the third year in a row that my friend Steve and I created one of our now infamous costumes for Halloween. However, last year Hurricane Sandy put a damper in our work celebration of Halloween and we were unable to debut the snow globe costumes that we had worked so hard on (the post for which I never posted, since we never wore the costumes and had final photos, but I shall post it soon as an homage to the costume that never happened).

In any case, everyone at work thought we were going to repeat last year’s costume. However, I quickly decided that I wanted to come from behind and change the costume up so that it was a shock to everyone. A few years ago Steve had mentioned wanting to be an old time villain, and I ran with that idea.

And now, without further ado, here’s how it was done:

For whatever reason, this costume looked like we stepped out of a saloon when I first drew it out. No idea why my brain stubbornly insisted that this was how the costume should be, but it definitely evolved A LOT after the initial sketching. The dress I ended up wearing looks NOTHING like this original sketch and went through a few different forms before getting to be what it is (see the final step for that). 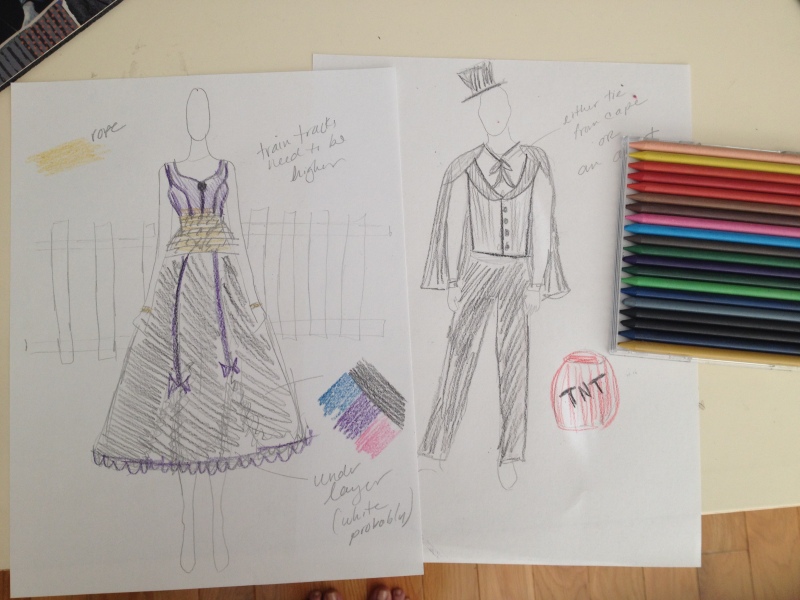 Of course, a damsel in distress must be tied to her very own set of train tracks, and so this was one of the first things that got done for the costume. First, cardboard needed to be cut down to the right size so that it fell on me in just the right way. I was trying to avoid having the back of the cardboard hit my legs, since that would make it semi-difficult to walk around all day with cardboard train tracks strapped to me.

Then it was a simple matter of painting the rails silver and the track pieces brown. I just used basic paint to do this. It’s definitely not a perfect job, but it does the trick.

Once I had cut the pieces and painted them, I wasn’t thrilled with the result. So I cut out circles to make bolts. I found myself much more pleased with the end result at this point, as the bolts gave the tracks some character and not just cardboard pieced together.

The paint needed to dry for a bit, and then it was time to assemble. I went out and bought super glue, thinking that would weld all this together, but I was grossly incorrect. I ended up using the hot glue gun we already had at work instead. (And, sidebar, I can totally tock a top hat while I work. In fact, it makes it much more fun, so naturally the world needed a picture of that.) 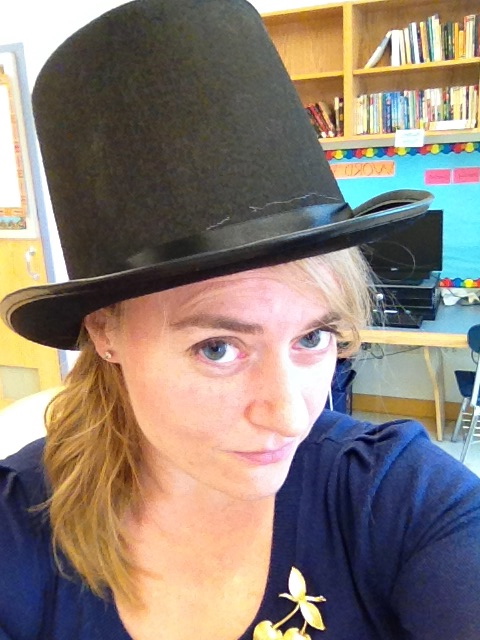 After giving the glue some time to dry, it was time to make the rigging for the costume. I had long decided that I didn’t actually want to be tied to the tracks, at least not fully, since I would need to remove them at various points throughout the day. 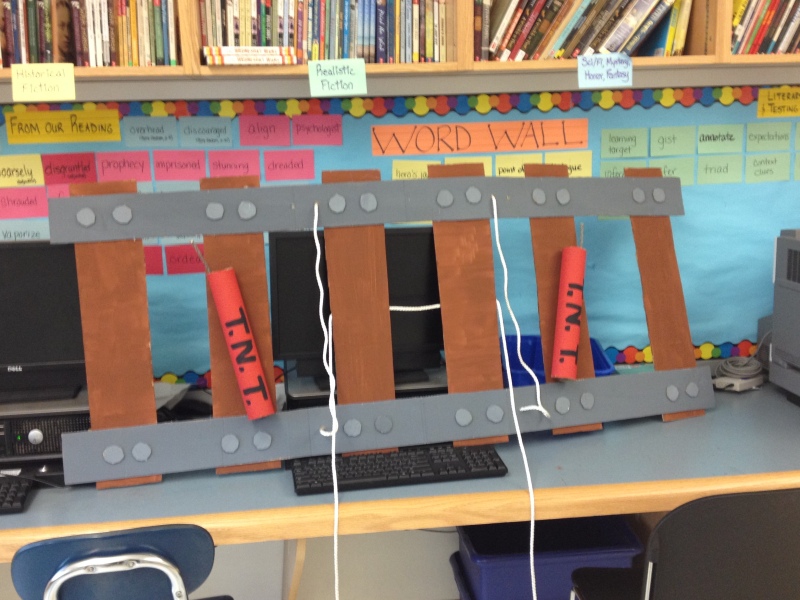 We also decided at the last minute to attach dynamite to the sides of the train tracks (see step three for the making of the dynamite). Train tracks were ready to go!!

A villain, of course, must have his dynamite. To start with, we used long tubes (that you might find inside bolts of fabric), and cut them down into 12-inch pieces.

Once they were cut down, it was time to fuse them together into dynamite-like sticks. To do this we used a hot glue gun and some upholstrey rope. (Is that a thing? I’m making it a thing.) Three pieces of “dynamite” were fused together, and then the fuse was glued into the center. 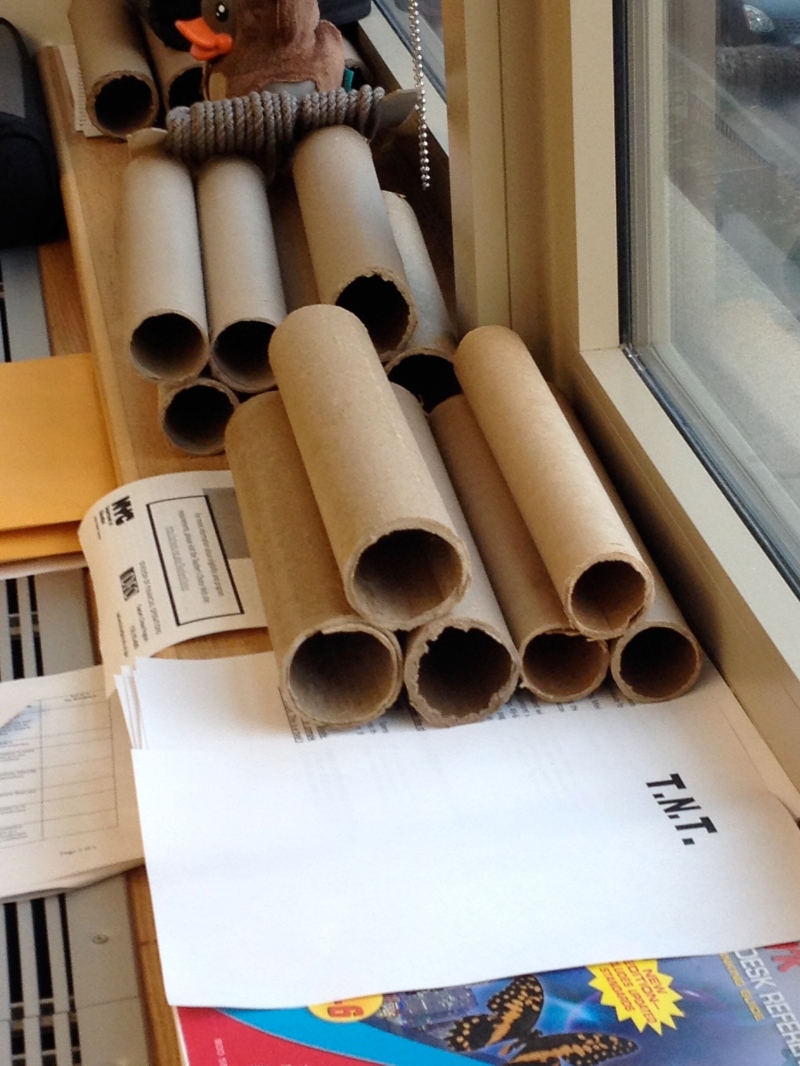 Then it was time to paint the dynamite. 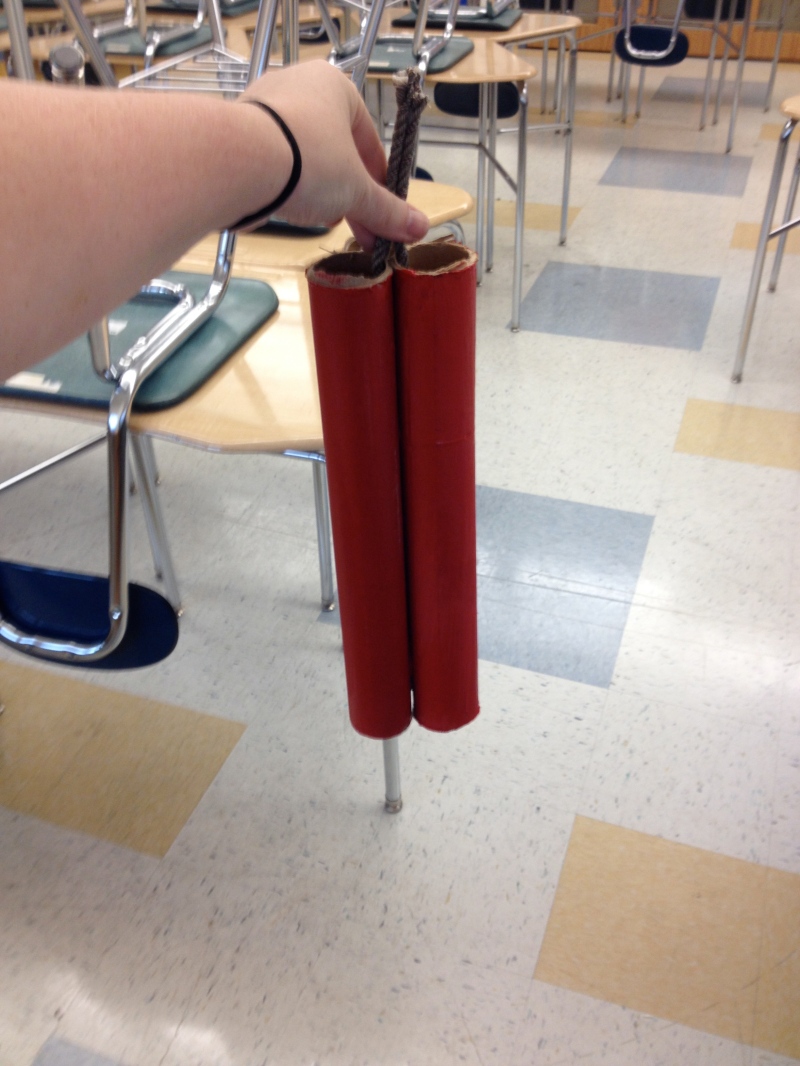 Once the paint had a chance to dry, we stenciled the letters TNT on each of them, let that dry and voila! Sticks of dynamite. 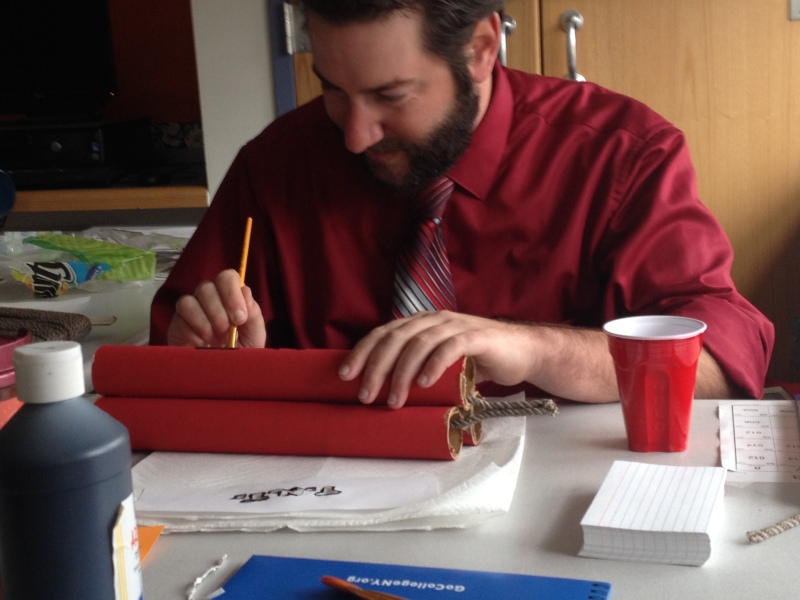 Your basic villain costume runs a fine line between villain and magician, it turns out. However, in the end it didn’t really matter as long as the whole thing came together the right way. The villain costume didn’t veer too much from the original sketch.

I made the vest using a pattern I had purchased last year for the school play. It ended up working perfectly. I used a satin for the lining and a pinstriped fabric for the outside of it. I was honestly surprised it fit so well, and I actually think it could be used as a real vest outside of costume purposes! 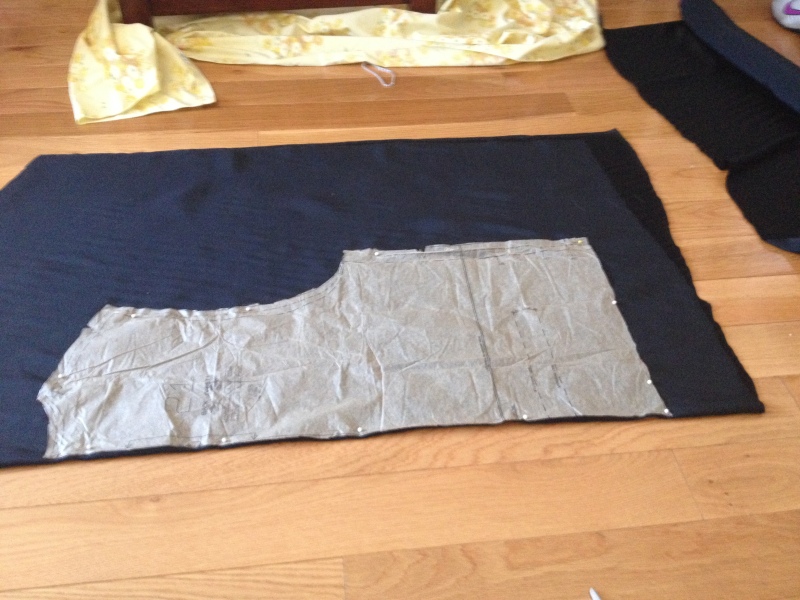 The next step was the cape, which I didn’t actually take any pictures of, at least while it was in progress. Basically I took a square of fabric and cut it, along with a semi-circle for the neckline. It ended up slightly crooked, but still pretty awesome. I used the same satiny fabric as the cape lining and it flowed really nicely. 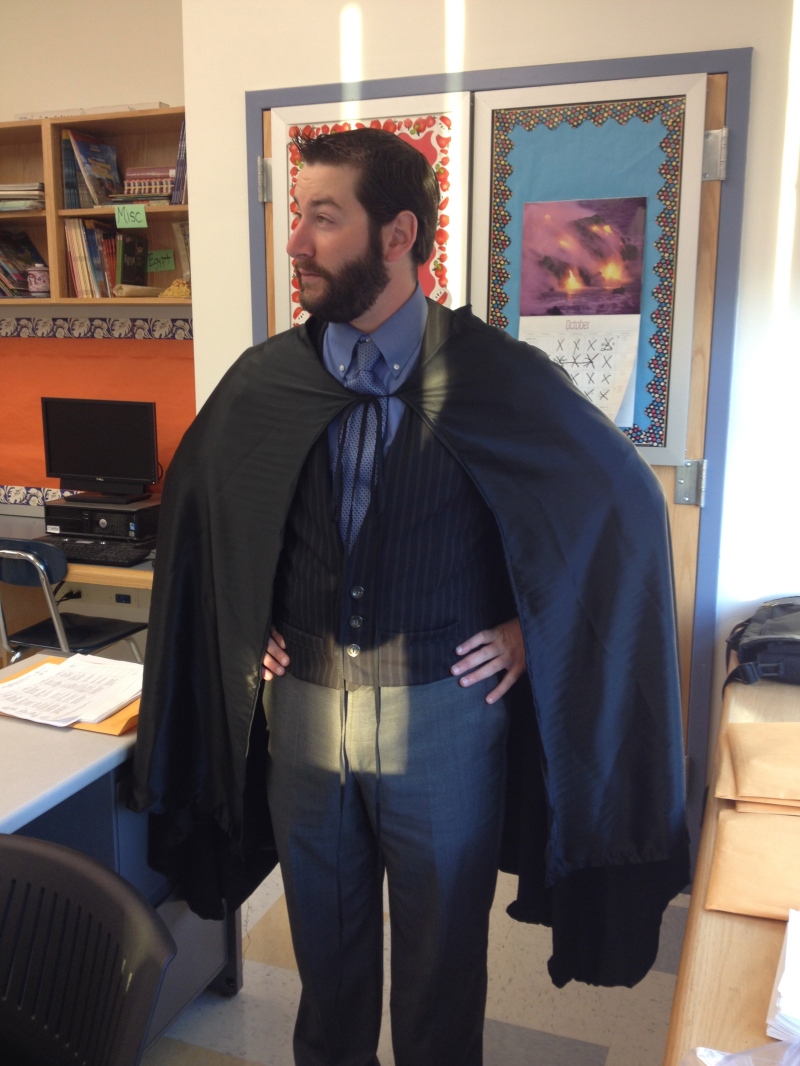 Of course, a top hat was also in order. That was easy enough to find on Amazon, and so that’s where it came from – and only $6 too! Everything was topped off by a cape – and black pants and a tuxedo shirt from Steve’s personal wardrobe – and we were good to go.

Step Five – A Damsel is Born (for Distress)

As previously mentioned, the damsel costume was the bane of my existence throughout this whole process. I just didn’t know what I wanted to do with myself as far as it was concerned. I went from the saloon girl to 1920’s at one point. This was the initial pattern was going with: 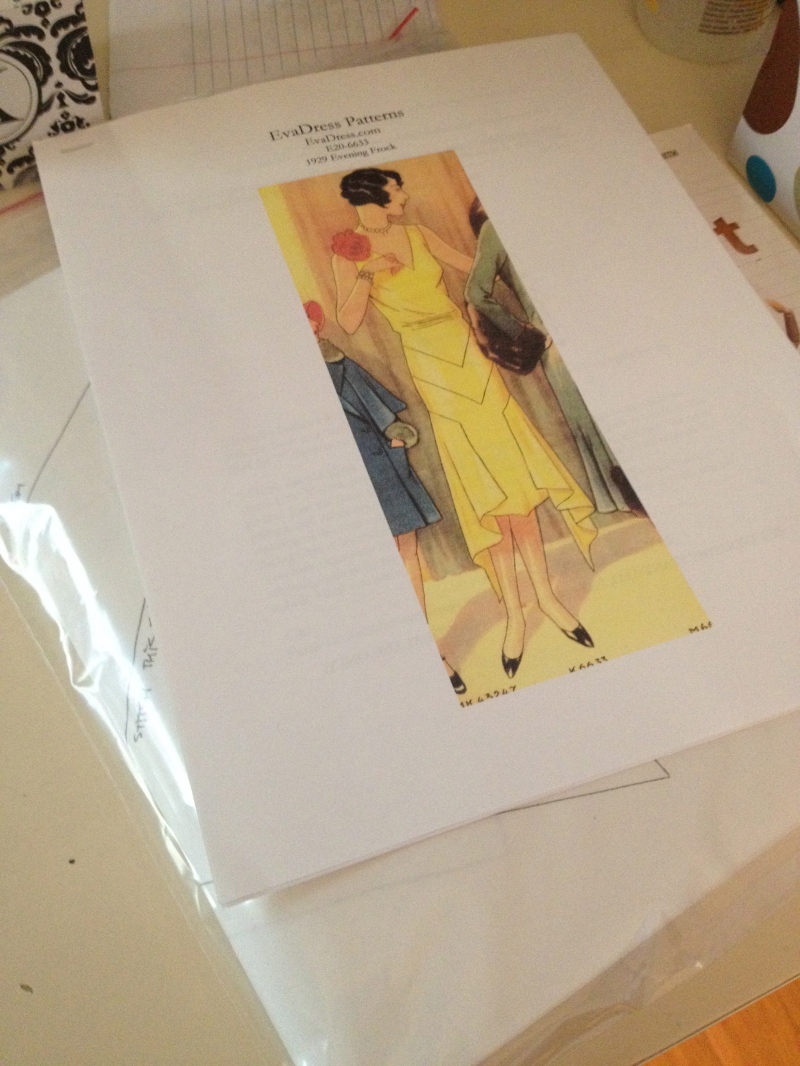 However, I royally messed up my attempt at this pattern and then I realized it wasn’t what I wanted anyway. I wanted something loose and billowy and innocent, and the above was more sultry than a damsel in distress should be. And so I turned to a 1910’s Titanic-esque pattern instead. It was one that I’ve used before so the chances of doing it wrong were slim. I chose a gauzy white fabric which I lined in a satiny, cornflower blue fabric. 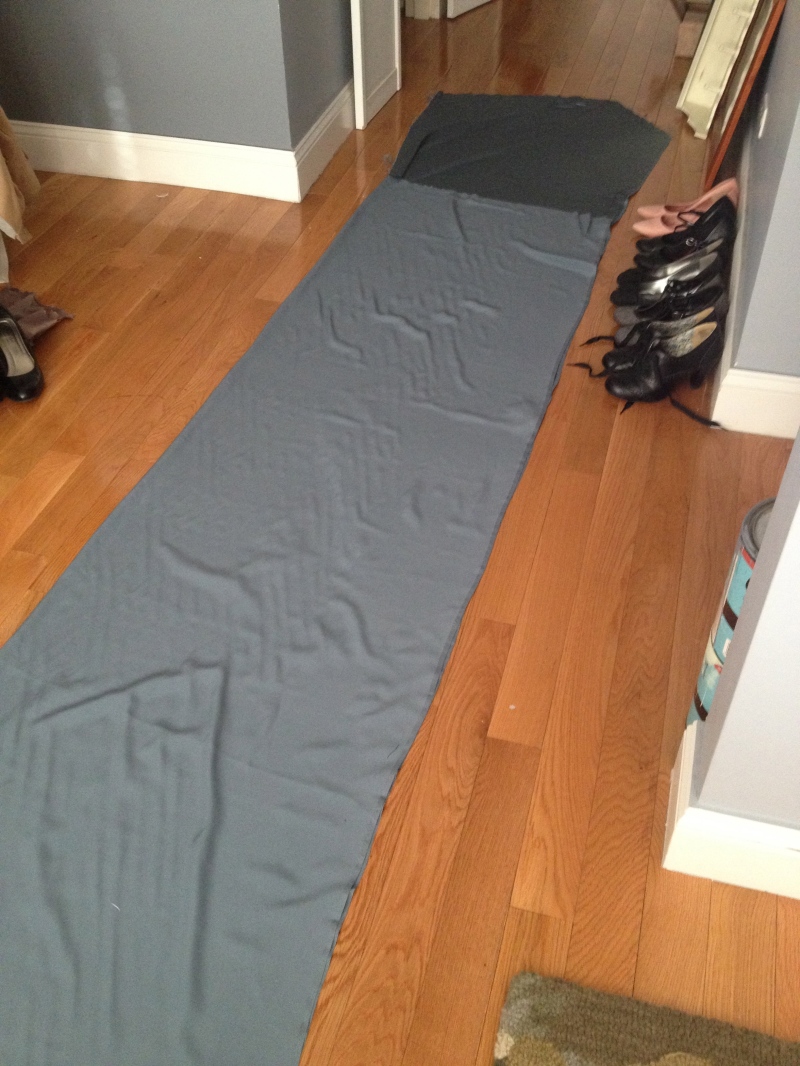 The dress actually came out great, and was exactly what I was thinking from the very beginning of this project. 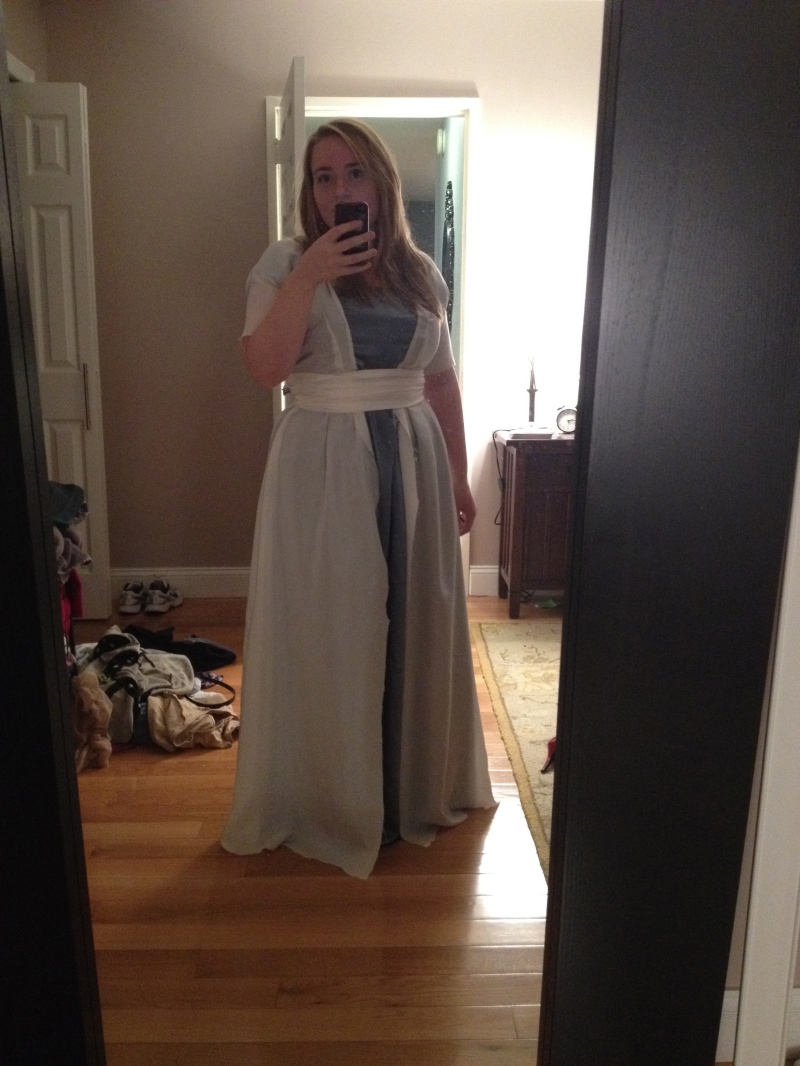 Once I had the gown I wanted, everything else seemed to fall into place. I spent most of the rest of the evening doing hair and make up tests. This is a terrible picture of it, and so not what I was going for, but it’s on the right track – and the red lipstick was an awesome choice even though it looks weird in this picture.

The rest came together quickly. I already knew what shoes I was going to wear (I’ve got these Chinese Laundry shoes I’ve had forever that I fell in love with when I first bought them but never really wear anymore except with costumes).

Now, in order to make it look like I was actually tied to the train tracks, the rope actually became part of the costume.

And as though all of the above wasn’t enough, I decided this costume needed sound effects! We downloaded music onto a phone and played that as we walked through the hallway. It was deemed a nice touch.

Oh, yeah… we won! We are officially the reigning champions in the Most Creative Costume category two years in a row (last year doesn’t count since technically Halloween never happened)!

Here’s how it all turned out: 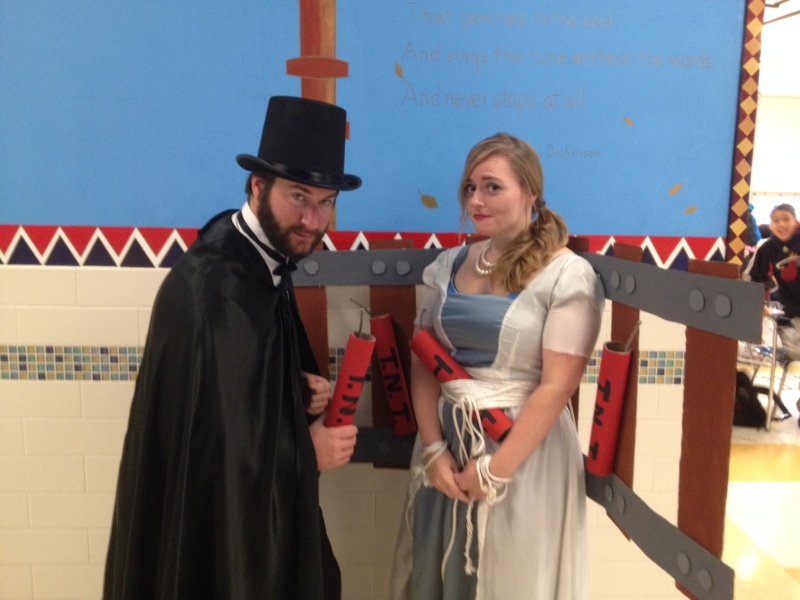 Until next year! What will it be? Well, I have some ideas (in fact, they may even involve a slightly larger group of people)… but I’m not saying!

And just a little bonus… made myself a Super Girl costume for after work Halloween.

I love that on Halloween I can display my love for costumes without people thinking it’s remotely weird.

For more in the Homemade Halloween series, click here.