I’ve been reading a lot of my old journals recently. I have been a lifelong journal keeper, recording everything around me in minute detail, and also complaining about various things or simply using the books to vent about my life.

It’s interesting to go back and read the journals (because of course I have a giant box full of them at home; I’ve never thrown one out). In the fifty plus volumes, so much has changed… and so much has stayed the same. It’s really funny to see where things are so different now from where they were once upon a time, and where things are pretty much the same way I’ve always done them.

With me focusing on transformation and change (or lack thereof!), I’m posting a little something different on the blog today. Or re-posting, really. This post was originally written and posted in 2016, but seemed so relevant after reading all these old journals. Once you scroll past the image, you’ll get to the start of the post I write in 2016, and I’m going to add on a little bit at the end.

The phoenix must burn to emerge. -Janet Fitch

So the following was all written in 2016. In any cases where I added something on for the repost, I put the additions in italics:

Most people who have known me for less than ten years are surprised to learn that I have a tattoo.  But I do.  It’s a tiger lily and I got it about ten years ago.  Truth be told, it was nothing I would ever pick out today, but I do not have any regrets about this particular piece of ink.  It was part of an exploration of myself that I was doing at the time, and it made sense to me. It does have some personal significance in that I asked my sister to design it for me, but that’s about it. I do not feel particularly connected to the symbolism of the tiger lily (generally confidence, pride and wealth).

I’ve heard that once you bite the bullet and get a tattoo, you get the bug for it.  For many years I didn’t think this was true.  I was perfectly happy with the tattoo I had, and happy that it surprised so many people to learn that I had it.  In the words of Mary Crawley from Downton Abbey, “I should hate to be predictable.” But getting another tattoo was the furthest thing from my mind.

And then I learned about my anxiety disorder, and it’s ability to strip me of my sanity sometimes.  I’ve talked about it here before, and it’s always existed, but in recent years it has really come to light as something that occasionally completely debilitates me.  It’s something that has always been with me, but I didn’t know until I was nearly thirty. Towards the end of high school and during college my college years I had massive panic attacks, but I had no idea what they were because they didn’t manifest the way I thought panic attacks occurred (mine were generally an inability to function and A LOT of worry crying). Thankfully, massive attacks of it have become few and far between since it’s discovery four years ago, but that doesn’t mean it’s completely gone.

This anxiety forced me to reevaluate a lot of things around me, and I worked really hard to change some things, both internally and externally, until I finally felt like I had put myself in a place where I could be myself, and live life the way I wanted to.  I was no longer walking around pretending to be something I wasn’t just to keep the peace with the people around me.

It’s funny how much easier it is to manage something once you really understand what’s happening. Knowing for sure that I have anxiety didn’t cure it, but it made me aware of it, made me aware of my triggers (mainly change outside of my control and certain social-based things) and, most importantly, made me aware of how I can deal with it before and during bouts of it. It really changed my perspective on a lot of things and made so many other things so much easier. And, like I said, knowing about it has helped me greatly reduce it (the anxiety attacks I discussed on my Instagram account when coronavirus first began were the first ones I had in many years).

Then about two years ago, after this transformation, the tattoo bug bit me again.  I wanted to find a quote to incorporate into said existing tattoo, one that represented these changes I made to my life.  For two years, I have found some close contenders but nothing that I wanted permanently etched into my skin.  Lewis Carroll’s “It’s no use going back to yesterday, for I was a different person then” got the closest and to be honest it still may make it to my skin, but not right now.  Regardless, there was something about the quote thing that was holding me back from getting it, and so I just kept waiting.

Oddly, the idea for this new tattoo came from watching Harry Potter and the Chamber of Secrets.  One of my favorite parts of both the book and the movie is when Harry learns about Dumbledore’s pet phoenix, Fawkes.  Being the well-read individual that I am, I certainly knew the legend of the phoenix rising from it’s own ashes, but for whatever reason, watching the movie on Monday made me sit up and listen – and I remembered the Janet Fitch quote from the title of this post.

The quote has been a longtime favorite, and I thought that I had finally found what I wanted to incorporate into my tattoo.  However, knowing how quotes can be changed and altered via the internet, I decided to do some further research just to check.  So you can imagine my disappointment when I found out that it has been misquoted quite a bit.  The actual quote is “the artist is the phoenix who burns to emerge,” which is nice, but not what I wanted.  As I  didn’t want something misquoted on my body for all eternity, my quest continued… but not for long, as the search for the quote also yielded the image I was looking for:

I found the image here on Pinterest during my quote research, and it all clicked into place: this is exactly what I wanted.

I knew right off the bat that this was what I wanted to do, and I didn’t hesitate, but I did do a little research into the symbolism of the phoenix, just to make sure.  And here’s what I discovered:

Everything about it just seemed perfect: representing a new version of myself and while the phoenix has no actual connection to the idea of anxiety, I feel like its very representative of what bouts with anxiety can do: break down everything and force a rising from the ashes of sorts. 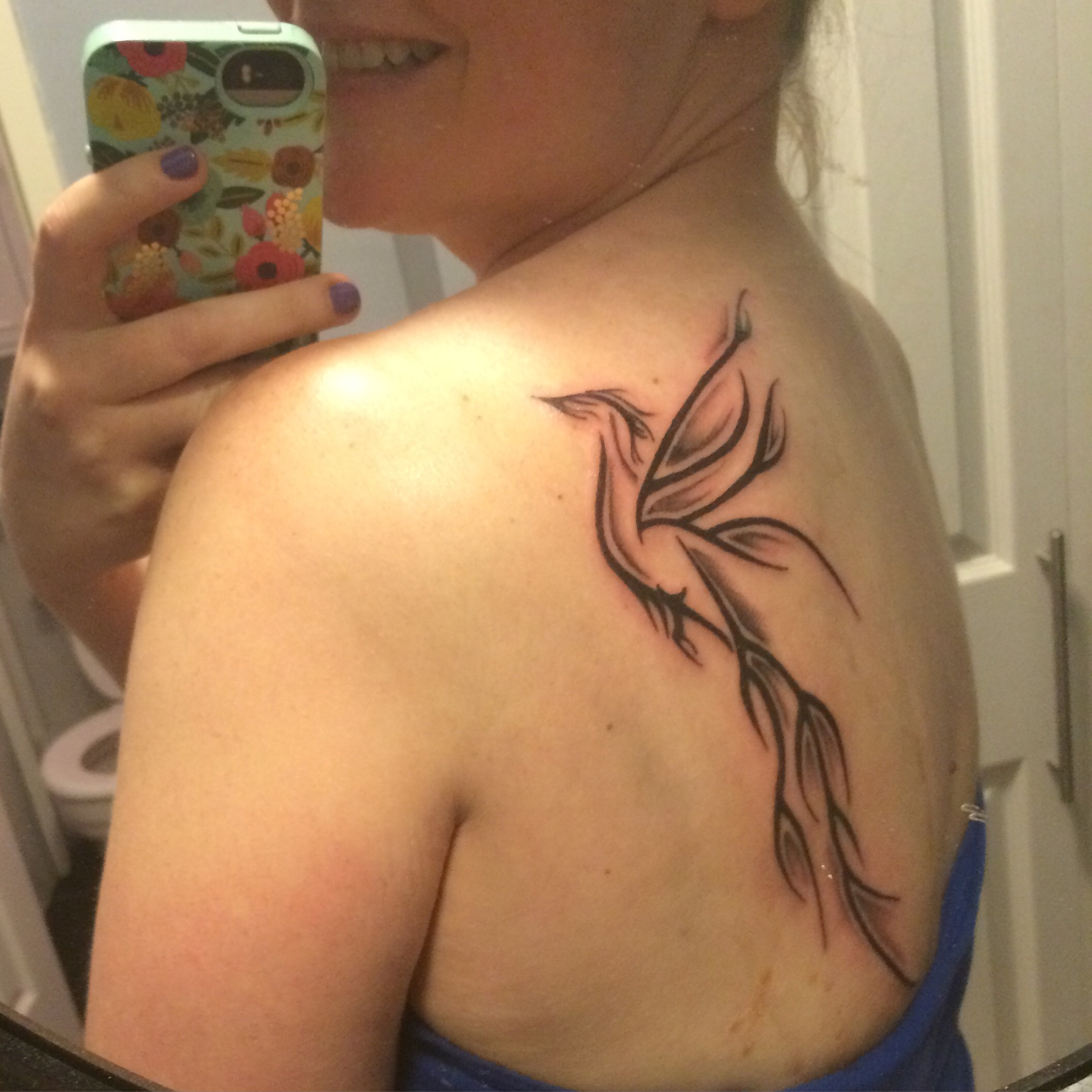 This ends the original 2016 post, though I feel like it should’ve ended with me talking about how much I adored the final product. These pictures were both taken shortly after on the day of getting the tattoo, so I included a picture below of a few weeks later where it doesn’t look so red.

My phoenix tattoo doesn’t get a ton of “air time.” I’m not often wearing something where the general public can see it, at least not fully (usually your just get a wing), particularly when it’s cold out, but I still love it just as much as the day I got it and I love that it’s there. And I continue to really love the symbolism of it, as I feel like its something that represents a lot of my experiences from around the age of twenty-two until now: “[The] Phoenix is always the symbol of undying perseverance, in spite of the expected opposition and blockade towards its goals (richardalois.com).”

And I’ll finish this off with a related quote from Doctor Who that I love (mainly so I can have an excuse to post it): “We’re all capable of the most incredible change. We can evolve while still staying true to who we are. We can honor who we’ve been and choose who we want to be next.”