Today was lazy from start to finish. Slept nearly the whole night again, but I’m still sleepy, but that’s neither here nor there! Today we lazed around the hotel in the morning, I used the Treadmill, and then we headed to Downtown Seattle (I almost wrote ‘Downton’ for those fans who will know what I’m talking about) and walked around the shops for a bit. While we were there, we heard from Lindsay, who was off getting her nails done with Shane and some of the family members involved in the wedding. She suggested we meet her for lunch, and so we figured out how to get there on the bus, and were off!

We met the newly manicured group at the Wild Mountain Cafe in the northern part of Seattle and enjoyed a meal while reminiscing on various Shane and Mike stories (just for some background, Shane and Mike are the ones getting married on Saturday and the reason why we’re here this week).

When we left the restaurant, I decided to go with Lindsay and Shane to Nordstrom, and mom headed off with Liz (Shane’s mom), to help create some of the little wedding favors for Saturday.

Other than getting to see Mt. Ranier from the road, the trip to Nordstrom was more or less uneventful. We got stuck in traffic and then were at the store for all of ten minutes, just to pick something up quickly.

While sitting in the traffic, I got a shot of the mountain:

We decided to meet the boys (Paul, Mike and Shane’s brother Caden) at Duke’s, a chowder place, for drinks. It was located along Alki Way, which offered really wonderful views of the city and the surrounding mountains (not Ranier in this case). We spent a delightful hour or so on the deck of the restaurant enjoying the view. 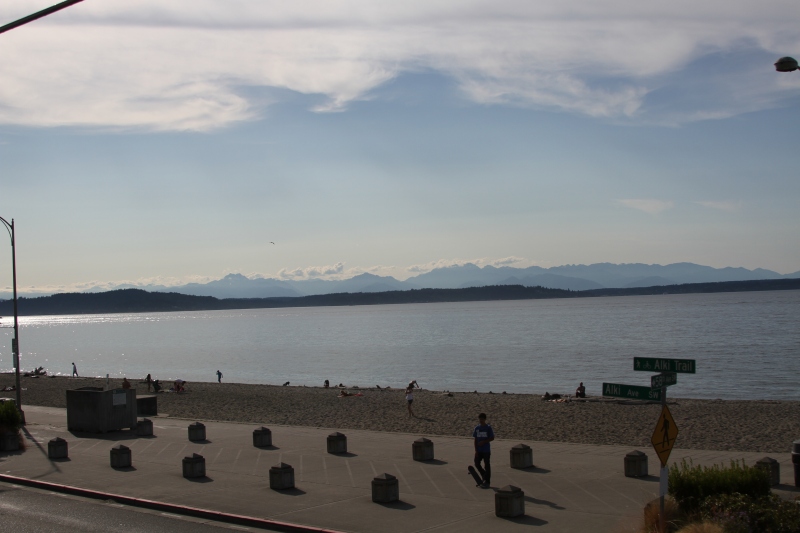 It also made for a nice place to get a few pictures.

From Duke’s, we headed back to Liz and Tony’s house to meet up with mom, and so that Lindsay and Paul could practice their songs for the wedding. While they practiced, I helped Liz and Shane separate and group all the table assignments so that each table was in it’s own bag, ready to go.

Before heading back to the hotel for the night, we walked through west Seattle with Lindsay and Albus and picked up some cupcakes. While mom was in the cupcake store, Albus apparently decided he was thirsty because he jumped up onto the water fountain as though he knew exactly what it was there for.

And I’ll finish off with another view of the water in the evening light, just because it’s so pretty: