Note: As with the Hawaii Travel Tales series, this a repost from my family blog. Realizing that this post had no pictures to accompany it because we were mostly on the plane and arrived late at night, I’m combining the first two posts.

In the summer of 2006, my cousin Jordan travelled to Los Angeles to take some film classes at UCLA. Deciding this was the perfect opportunity to see the city, my cousins Emily, Kara (who are also Jordan’s sisters; not sure I’ve ever gone through an entier rundown of my family tree but there are some connections) and I headed there to visit him for a few days. Our time in LA was short – just three days – but we managed to make the most of our time!

Our adventure began on July 26, 2006 when we met at Kennedy airport to board our plane (and since we still have the useless details: American Airlines, Flight 21). On our way to gate 36 for boarding, we happened to witness a woman drop her suitcase down an entire escalator flight. None of us were sure how it happened, she just seemed to have let go of it. She attempted to run down after it, but it was “saved” by a man below her and handed back.

Once in the air, we occupied ourselved with various things (as the movie sucked – I can’t even remember what it was!). Kara and Emily began drawing pictures where they would fold a piece of paper, and one would draw the body and the other would draw the head – without looking at the other person’s contribution. The pictures all came out very entertaining, such as a lion’s head with the body of someone wearing a cape as though getting a haircut or a shave.

They took a break from their drawing to eat one of the snackboxes sold by American Airlines. It included shortbread cookies, a dried fruit packet, goldfish crackers, water crackers (and probably some cheese) and a beef stick (though this does not seem important now, it becomes and important part of our tales in later installments).

During the flight, Kara also “made friends” with a baby sitting in front of her. Really, the young child just kept turning around and touching Kara on the knee.

Upon arrival in Los Angeles, we headed to the exciting Enterprise car rental, where we met up with Jordan. We rented a Ford Focus, and it turned out to be the exact same car Jordan had rented when he arrived. At this point, it was about ten o’clock and we were all getting tired from the flight and us being used to a time difference of three hours later. After a brief stint of not being able to figure out where the headlights were on the car (and Kara yelling this out the window to amused onlookers), we followed Jordan to his apartment. Fittingly, we heard the “Wind Beneath My Wings” in the car on the way (a inside family joke from a time when my cousin Jordan).

We arrived at the apartment and met Jordan’s roommates. After a short introduction, the first thing we heard from them was “So, Jordan, we opened up the stove and the pen cap isn’t there anymore.” Apparantly, because of their lack of pot holders, Jordan had attempted to pull the tray out of the oven using a pen cap, which he dropped INTO the oven. The group was in agreement that it had probably melted away. This is what happens when four guys share an apartment for summer…

The real talk of the night, however, was that Jordan and Ian had gone to the Talladega Nights premiere and seen Will Ferrell. Ian gushed over the experience, saying that he called everyone he knew because Will Ferrell had given him the peace sign.

Jordan was loaning us his bedroom for the duration of our stay, so we set up camp in there, Kara taking the top bunk of the bed, me taking the bottom and Emily taking the floor temporarily (she and Kara switched off at some point). Then it was off to bed for our early adventures the next day!

Day two in Los Angeles started early, as we wanted to drive forty-five minutes to Disneyland. We were very excited because, as we kept saying, none of us had ever “been to the land” before (we’ve been to Disney WORLD many times, respectively). As we were waiting for each other to get ready, we wandered about Jordan’s apartment, making our way to they alleyway/patio in the back.

So, after getting dressed and eating breakfast (toast and peanut butter, as the only other option was frozen White Castle… which, I’m not gonna lie, I would not have been oppposed to!), we headed out to the car, only to find a PARKING TICKET! We were about 10 minutes too late to move the car, and because of it, now had an extra $45 expense on our hands. However, we were a little too excited to think about it for too long, so we tucked it into the glove compartment and piled into the car, headed for Freeway 405.

Our bad luck was not over for the morning. The closest freeway entrance to us turned out to be CLOSED that day! We had to follow alongside the freeway until we found the next entrance. As we got onto the freeway, I couldn’t help thinking of the line from ‘Clueless’ when Dion is learning to drive and Murray says, “Yo, you’re gettin’ on the freeway!” and the trio procede to scream their way through until the next exit! I have to say though that driving around was fine, except for the confusing area where the exit ramp seemed to be on BOTH sides of the highway (turned out the HOV lane was on one side and all other traffic was on the other).

We finally made it and parked the car (on the Goofy level in Secion D7 – we saved the parking stub), and then got our tickets and a park map. It happened to be Disneyland’s 50th anniversary that year, so everything was very festive. We had to take a tram to the park, and we highly entertained with the fact that they referred to the employees as cast members, and how even when they were warning you about something they use sugary sweet voices, prompting me to say to Kara and Emily, “If you do not comply, one of our cast members will be happy to pound you to a bloody pulp.” 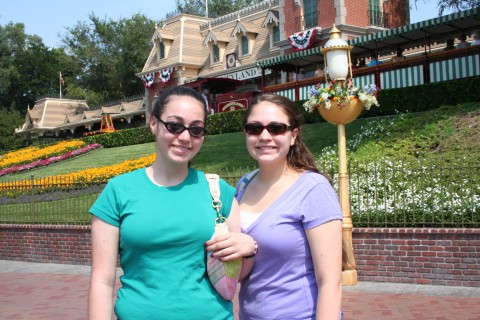 Emily and Kara at the entrance to Disneyland! 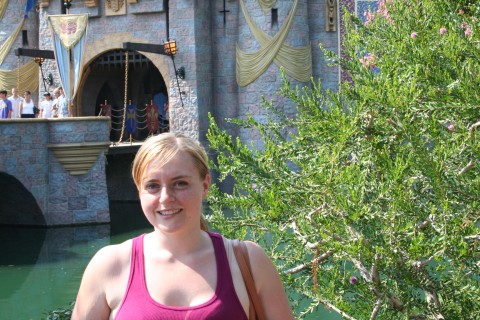 Me at the castle.

Our first stop was Peter Pan’s flight, one that we all agreed was an excellent ride from our experiences with it at Disney World. The lines were long but it wasn’t too hot out so waiting wasn’t too bad.

Emily on “It’s a Small World.”

We spent the rest of the day just experienced Disneyland’s attractions. We headed to the Pirates of the Caribbean ride, the Haunted Mansion, It’s a Small World, the Alice in Wonderland Ride, the Teacups, and we even caught a parade on our way to the Bobsled ride. Disneyland is more or less the same as Disney World, but I did find that they had more Alice in Wonderland attractions than Disney World does, something that I appreciated greatly.

After we had seen everything, we got some ice cream and did a little shopping, where I found some fabulous hats (but, alas, did not purchase any of them). We headed out, a little tired, and ready to meet Jordan for dinner.

First, however, we had to head to Wal-Mart to pick up some blankets. Though Kara and Emily had brought some very funny portable sleeping bag things, we needed something else as it got chilly at night in the dorm Jordan was staying in. We got the things we needed – while they were coincidentally playing “Down in the Boondocks” in the store – and headed back.

Dinner was at the Olive Garden, where Jordan somehow managed to drop-kick the little thing that lights up when it’s time to head to your table! It was the highlight of the night!

Emily and Kara, exhausted from the day’s activities.